Our busy friend 'Frankie,' the Walk 'N Roll Dog is in the news again, and this time she made the day of one of her admirers, a young Illinois boy named Cameron Thien.  Cameron was traveling with his family and visited Elkhart Lake, Illinois, when he was fascinated by Frankie's book in a gift shop there.  Turns out the owner of the shop knew Frankie's mom, Barbara Techel, and set up a chance for Cameron to meet Frankie!  Here's an excerpt from Fox 11 News:  Barbara says the most valuable lesson Frankie teaches is no matter what life struggles you face, you can be happy. Barbara says Frankie has given her a new outlook on life, and believes fate brought them together to help others, and bring happiness to kids just like Cameron. 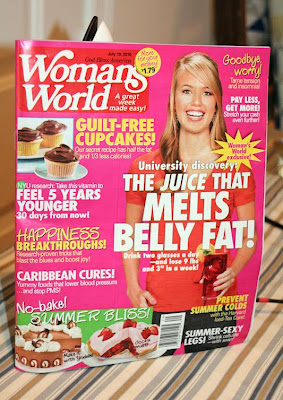 Frankie is also in the current edition of Woman's World magazine, so be sure and pick that up!  Thanks to our buddies 'Kate' and 'Allie' for sending in such nice pics!  They write:
Dear Joey and Maggie,
Dachshunds are popping up everywhere. The July 19th issue of Woman's World (look at the supermarket checkout) has the story of Frankie the Dachshund, owned by Barbara and John Techel. Frankie injured his back and now uses a cart and has been visiting schools and hospitals to teach about disabilities ever since. (Page 40--the Inspiring Animal column)
We thought it was neat that this story appeared in WW, since it has a huge circulation and the ability to get a Dachshund story out to a large audience! 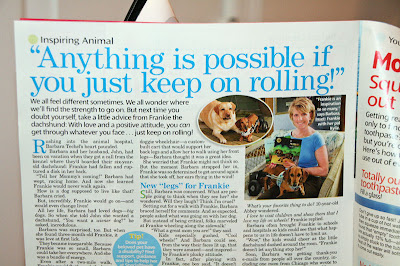 (click any photo to enlarge)
Posted by Rowdy and Bette at 8:57 AM