Lucy the Dachshund Gets a Reprieve 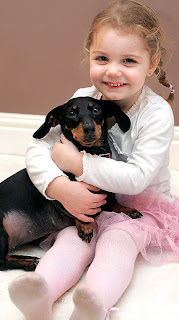 Meet 'Lucy,' the not-so-dangerous black and tan smooth dachshund, and one of her humans, Monique Hobson, aged two. Lucy got loose in October of last year when the family was bringing in groceries from the car and nipped at the ankle of a burly neighbor who pressed charges. Due to a 1991 dangerous dog law, there was a potential fine of £5,000 or 6 months in jail, and Lucy could have been put down. Thankfully, she got a reprieve. Excerpt from The Daily Mail: An eight-inch-high "sausage dog" was given a reprieve by magistrates today after her owner was cleared of letting a dangerous dog run out of control.
Burly landscape gardener Shawn Anderson claimed he was "inconsolable" after miniature Dachshund Lucy allegedly nipped his ankle and bit his jeans.
But Newcastle Magistrates' Court heard he suffered no injuries, there were no teeth marks and no damage to his jeans after the yapping dog ran round his legs outside his flat in Gosforth, Newcastle, in October last year.
He lived in the property below Lucy's owner, Melanie Hobson, 26, her husband Steve and their two children, Monique, two, and four-year-old Jacob.
Magistrates heard that Mrs Hobson was carrying shopping from her car after a trip out with her children when Lucy ran off, barking.
The court heard the dog approached Mr Anderson, ran round his legs and, according to him, bit him on the ankle.
One of the two young children ran up and grabbed the dog, the court heard. Mr Anderson then shouted at the owner: "If your dog bites me again, I will have you done."
The court heard Mrs Hobson replied: "What are you on about? She didn't touch you."
Read the rest. 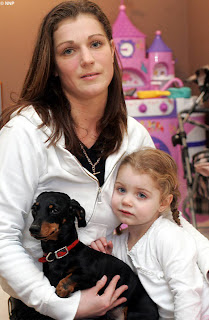 Lucy with Owner Melanie Hobson and her daughter Monique 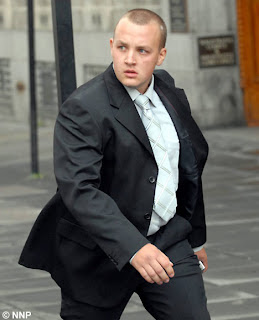 What a turd of a person- a coward and a waste of space.
Opportunistic total loser.