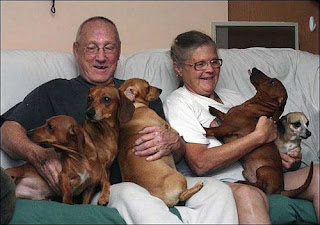 Meet Allen and Shari Prosser and their five dachshunds: Angel (father), Lady (mother) and their three pups Blacky, Droopy, and Babygirl. A neighbor complained to authorities about the dogs, which exceed the city limit of three dogs. Other neighbors don't seem to mind. Excerpt from The Indy Channel, Muncie, Indiana: They might look too small to be much of a problem, but five pooches represent a pack of trouble for a Muncie family because they have two too many.
Shari Prosser and her husband, Allen, might have to decide which of their mini dachshunds to keep and which ones to let go.
The dogs, with their short legs, long bodies and feisty attitudes, were bred for their ability to chase badgers from their burrows.
That's why the wiener dog is also known as the badger dog. Badgered is exactly how the Prossers feel.
"They're my kids. They're my family. I don't want to lose them," Shari Prosser said.
The longtime Muncie residents have grown children and said the dogs keep them company. Two years ago, they lost their grandson, Trenton, to a fire in their home.
"They filled the hole when I lost my 2-year-old grandson. I lost animals in the fire and they fill the hole," Prosser said.
The Prossers hope to get a zoning variance that would allow them to keep all of the dogs.
"I'm going all the way. If I don't win, I'm moving out of state -- sell the house, move south where my daughter lives," Allen Prosser said. "I'm not going to get rid of them."
Read more and see a video at The Indie Channel.
Image source and additional info: The Star Press
Update September 29th, 2007: Board rules Muncie couple can keep their 5 dogs 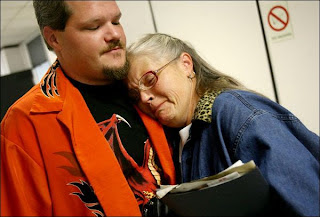 An emotional Shari Prosser rests her head on her son Donnie’s shoulder after the Delaware-Muncie Metropolitan Board of Zoning Appeals granted a variance allowing Prosser and her husband, Allen, to keep the family of five miniature Dachshunds at their home.
Posted by Rowdy and Bette at 7:18 AM

Good for them! That law is a bit strict, in my opinion.

I agree. Their story, and the picture, are very moving. Such small dogs that give so much comfort. Christa