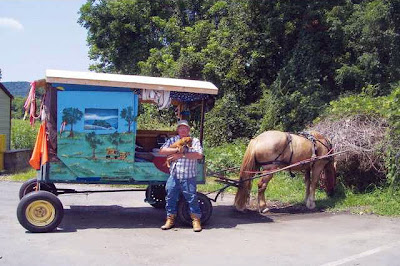 What can we say really - getting to travel all day with your Dad, meeting new people, smelling new smells - sounds like heaven.  Meet 'Wagon Man' James Newton, his half-Belgian horse named 'Friday,' and his red smooth Dachshund named 'Buster Brown.'  They have traveled over 4,000 miles since February of 2009, starting off in Corpus Christi, Texas, and heading to Alabama.  They recently stopped in Cleveland Georgia where the Gainesville Times caught up with them:
"I've been traveling for over 4,000 miles in nine states since February, 2009," he said. "I love to travel. I'm going slow and taking time to look at the countryside. I didn't have too many relatives to hold me back."
Newton said he averages about 15 miles each day on the road.
"You only get one chance to live and will be here on this earth for a short time so you had better enjoy life all you can," he said.
He said while touring America in his wagon, he stops to read historical markers along the way.
"I'm just living my dream," Newton said with a smile.
That is apparent. Those words are written more than once on his home on wheels.
Read more at the Gainesville Times.
Oddly, this isn't a one-of-a-kind tale.  Check out A Drifter, His Horse, and His Dachshund
Posted by Rowdy and Bette at 9:10 AM

That's cool. We are all for living your dream :)

Of course its the horse reading da map. LOL