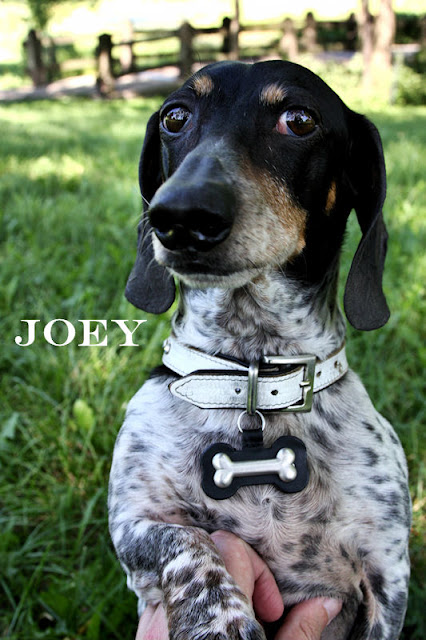 We had no update yesterday because it was time for your Long and Short of it All host 'Joey' to have his 6-month checkup at the Veterinary Referral Center.  Regular readers will recall the tough times Joey had last fall.  Almost a year ago, on August 17th, 2010, Joey underwent a risky surgery to have both of his adrenal glands removed.  He had a tumor in each gland that was giving him Cushing's disease, and one of the tumors was so large that it was growing into his vena cava, and would have blocked it completely in about 3 months, and Joey would have passed.
Although he had about a 60% chance of making it through this risky surgery, he sailed through.  They also removed his spleen, as they saw a nodule on there which could burst over time.  It was the surgical complications which almost did Joey in - a blood clot lodged in one of his lungs the day after surgery, and the second day after surgery, he developed severe pancreatitis as a result of the procedures.  Either of these events could have taken Joey over the bridge.
Every day was touch-n-go for him, but we continued to treat the blood clot, and he wasn't allowed to eat for almost a week because of the pancreatitis.  He started to eat a little again after a week, but the pancreatitis was just too much, and he was fasted for another week, and started on Parenteral Nutrition.  At this point, he simply had to eat and to be able to keep it down, or it would have been all over for him.
But thanks to all the prayers and support he received from readers here, and from top-notch medical care in the ICU for 2 weeks, he's still with us today.  Dad is still paying off his medical bills, which totaled a nice new mid-size car, but it's priceless to still have Joey around today.
His checkup went very well.  His internest was happy to see how much muscle mass he has gained.  He actually needs to lose a few pounds, weighing in at 25 pounds, when he should be 22 or 23.  Dad isn't feeding him any more, but he is getting older, now that he's 10.5 years old, and could use a reduction in calories.  All his bloodwork came back great.  His alk phos is a little high, pointing to some liver failure, but the internest is not too concerned about it.  His Na/K ratio is good, a sign that his medicine for his Addison's disease (because he has no adrenal glands) is working well (he gets a monthly shot of a drug called DOCP).
He is fairly stable on his daily prednisone dose, but about once every 4 - 6 weeks he seems to bottom out - he'll start vomiting in the middle of the night, and vomit up all his food and become very lethargic.  A boost in his prednisone seems to help him through the event.  Then we tinker with his dose by increasing it, but then he starts drinking too much water, so we decrease it again.  It's a catch-22.  Humans and animals generate internal steroids via their adrenal glands during times of stress - a fight or flight situation, an illness, or even a nail trim for an Addison's dog, can cause them to have such an event when the body needs more steroids.
Joey will also continue on his ursodiol for his gallbladder sludge that he developed during the pancreatitis attack.  The vet asked if we wanted to do an ultrasound to look at his gallbladder, but at $350 for the procedure, not sure what we would gain.
His heart murmur seems to have slightly increased to a 3.5 or 4.  We asked about a cardiology consult, but again, at $500 for the consult, we are going to wait a little longer, or perhaps until he shows some signs of CHF like coughing.
So, all in all, Joey got a good bill of health yesterday.  If you saw him, you wouldn't know that he had any medical complications at all, he's such a happy boy, tail always wagging.  The bill came to a little over $500, but that included a vial of his DOCP ($160, which will last 4 months), and we had 2 new tumors aspirated, and they are both fatty, so nothing to be concerned about there.
We just wish Maggie was doing as well in her treatment for Cushing's disease.  Our little girl just isn't happy, and seems to be losing that spark in her eye that we love so well.
Posted by Rowdy and Bette at 9:16 AM

I hear your pain re the vet bills, but it is so awesome that Joey is doing well! He looks fabulous in that photo, too.

That's great that Joey had such a good check up! Certainly a blessing. I hope Maggie improves. Sorry to hear about her troubles with Cushing. Will be keeping all three of you in prayer.

Carson, thank you for the update on Joey. We remember well last year how sick he was, and we are thankful that he is doing so well now. May your sweet Maggie begin to feel better, and may God bless you all with good health. With love, Jayne and Annie

We are so happy that Joey is doing so well. Our best wishes go to Maggie since we all need that sparkle. We love all of you!

Everyone is pulling for Team Long and Short. We are so glad for every improvement.

Such a complete update! Y'all have been through so much in the last year and our prayers continue to be with you. Joey and Maggie are just wonderful doxies and I'm sure that everyone wishes them the best of health and a happy life. Carson too!

Go Joey Go. Go Maggie Go. We are all rooting for u. Good health, many more happy healthy years, and maybe with a bit of luck a lottery win to help dad. PS: You look very handsome Joey in that picture. Love from Shilo, Sass, Maggie and Skyla from Quebec Canada.

Who's a good boy? Joey is! Great to hear your checkup went well. Sweet Maggie girl -- I sure hope you're feeling happy again real soon. There are SO many squirrels and birds to chase and other things to bark at. Much love from Mina, the mini-dachshund ruler of the neighborhood.

Joey is so beautiful. So glad he is doing well. Those Vet bills are as big as human bills. I think we all have learned a lesson about insurance. There are so many good plans these days. It would have helped so much. We all live and learn.
I hope Maggie improves. Amazing how much we see in their eyes. All the way to their soul. I know she is happy to be with you. Sorry she just doesn't feel so great. Hang in there Maggie.

We are glad to hear the improved news about Joey, but saddened for Maggie's lackluster report. It is so difficult to see our pets suffer, but so rewarding when all our efforts give them quality of life. You definitely have given Joey and Maggie every medical opportunity possible. They sure won the pet dachshund lottery!

Happy vet visit to you Joey :) so glad to hear you are doing well. I hope i look half has good looking as you when i am your age, keep up the awesome blog, sloppy kisses, Oscar

You guys are so sweet. Just really , really sweet. Thank you so much.

my deepest wish for joey is may he getting well every day. i look forward for Joey's news from you guys. while I'm trying to have a dachshund to pet. such a gorgeous job guys.

wiiiiiiiiii... we're really happy for Joey beeing OK and doing so well! way to go coy!:***
And still holding our paws crossed for Maggie to get better...
kisses from Leia to all three...:****

Vet bills are tough for everyone... at least you have good medical care over there. over here in M'sia, we dun even have those scans or treatments. they always seem to want to take the easy way out. even if they had, it would cost an arm and a leg.

so good for both Joey & Maggie! hopefully Maggie's update will be as great as Joey's.

lots of licks from Jed n hugs from Jolyn.

So glad to hear an update on Joey and his improved bill of health! Hang in there Maggie, we love you and your sparkle! We'll be sending positive vibes:)

Lots of love to ALL of you. So happy about Joey but sad about Maggie, I hope she can turn a corner and find a bright spot. Our hearts are with you Carson, you have been through and are still going through a lot with your family. Teagan is looking forward to meeting Joey and Maggie and you on the 28th.
Melinda, Teagan and, in spirit, Jeeves

Loved reading Joey's update!! He's come such a long way!!!! My heart goes out to Ms. Maggie but know she's a tough gal!!! Sending lots of prayers, tail waggs and loads of love!!