Missing Ohio Dachshund Given Away At Yard Sale 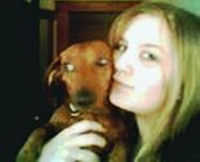 Have you seen this Dachshund?
We can only imagine the heartbreak of this family in Parma Heights, Ohio:  to let your 11-year-old Dachshund out to go potty, he goes missing, and then to find a man who says he gave him away at a yard sale!  Excerpt from Cleveland.com:
Little did Brian Tabar know when he let his Dachshund "Oscar" out to do "his business" Aug. 6 that it would be the last time he would see the 11-year-old family pet.
Tabar and his 15-year-old daughter couldn't find Oscar, so they started to put signs up around their Ardmore Avenue neighborhood in Old Brooklyn.
While canvasing the neighborhood, Tabar met a man on Wetzel near Pearl Road who told him that he had picked up Oscar on Aug. 6. Thinking he was a stray, the man "adopted" Oscar as his own. This is where the story takes a strange turn.
The man told Tabar that he took Oscar to a yard sale on Aug. 7 or 8 in Parma Heights in the Chesterfield/Maplecliff neighborhood. While at the yard sale, he met a family who fell in love with Oscar. Apparently, they have Dachshunds of their own and took Oscar off his hands.
"He has been a part of our family for 11 years," Tabar said, "and my daughter is devastated."
Find contact info at Cleveland.com.
Posted by Rowdy and Bette at 7:39 AM

Great New's the dog is back home!!

Thank Dog he's home. Saw the owners comments. She should put name tag on Oscar so he won't be mistaken for a stray.

Chipping is the only way!