Shout Out From Adele 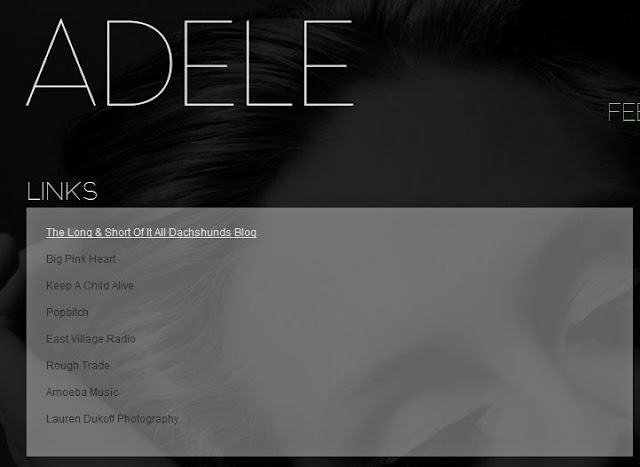 We love moody English pop stars around these parts, and were surprised and honored to find out that singer Adele might like us too - at least she gave us nice linkage on her official website.  Danke Schön!
After a little research, we can't find that she has her own Dachshund, but seems to have a beautiful Bulldog!? 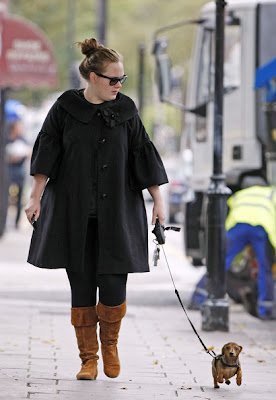 UPDATE 11/30 1 PM:  Thanks to Mollie for sniffing out a photo of Adele with her Dachshund!  Like Molly says, this red smooth is tiny and cute!  Photo Source.  By all means, if you have any more info, please leave a comment.

Adele was the first recipient of the BRIT Awards Critics' Choice and was named the number-one predicted breakthrough act of 2008 in an annual BBC poll of music critics, Sound of 2008. She is a multi-Grammy Awards nominee who has won two awards, Best New Artist and Best Female Pop Vocal Performance in 2009. Source.
Posted by Rowdy and Bette at 9:24 AM

Hi Joey and Maggie, not a surprise really. The Long and Short of It All is a wonderful blog and Adele clearly recognizes something great when she sees it! Congratulations!

Adele does have a dachshund. Her name is Paloma Faith and is tiny and cute! http://www.zimbio.com/photos/Adele/Adele+With+Paloma+Faith/yoQ6g-q10bo

Good sleuthing Mollie! We think "Poloma Faith" is another singer though. We'll go ahead and update with that photo though!

Well that is so very excellent and exciting! You deserve it!

How exciting! Congrats to you!

Adele is awesome! Amy Winehouse-ish sound but with a dachshund instead of a drug problem!

whooo, me likey dat! and so happy for your newfound linkage!! :)

ha, okay I need even more music recommendations cuz I bought her song but need like 75 minutes more of music to burn a CD to sew by! look what you've started!

lol - heard this overhead at the Wicker Park Jewel (a local grocery chain) over the weekend. It's a good song.

Adele has got a red mini smooth dachshund, his name is Louie... Her new single is amazing, the new album will be awesome!

If you happened to catch Adele's interview with Anderson Cooper on 60 Minutes last month, you would have gotten a glimpse at Adele's doxie. Loved her to start, love her even more that she's in our club!