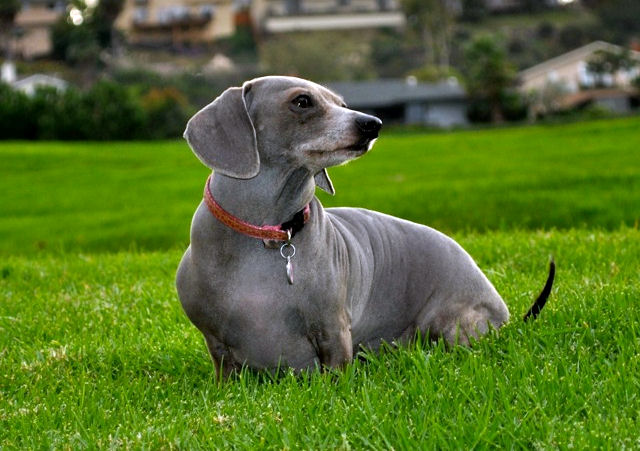 She almost glows!
Thanks so much to Callie Dunbar for writing in and sending such nice photos of beautiful blue smooth 'Dixie' and her handsome red smooth brother 'Duncan!'  Your Long and Short of it All host 'Joey' would like to add that your Independence Day celebrations would be complete with the addition of a bright white piebald!  Joey always has to have his say, huh?  Without any further ado:
Hi Joey and Maggie!
I'd like to introduce you Dixie, our 4 year old blue mini doxie. Dixie is a darling girl, she loves her family and is as sweet as can be (once she gets to know you). She has been a part of our family for three years now, she came to us via craigslist. We responded to her ad and were told we had to come pick her up that night (at around 9:00 p.m.) or she was going to the pound the next morning because her owners couldn't have dogs where they lived. We had no idea dachshunds even came in this color until we met Dixie. Apparently she is quite rare and the majority of blue dachshunds, including Dixie, suffer from Alopecia. She has some short hair on her face and legs, but her body is almost completely bald. Since she has no hair she gets sunburned very easily and gets cold quite easily as well, so she has quite the wardrobe and (unlike most dogs), she loves and appreciates her clothes when she needs to wear them. She is also especially fond of burrowing into anything warm and snuggly and taught her older brother (who I don't think had ever even seen a blanket before we got him) to do the same.
Dixie's older brother is Duncan, an 8 year old smooth red tweenie we found at the pound two years ago. I've never met a dog as loyal and sweet as Duncan, although he does have a few "quirks" and abandonment issues we've had to learn to deal with. For example, when he's feeling submissive he rolls over on his back and pees like a fire hose, but we figured out that if we cough, he stops and jumps up! Oh, and he loves to ride in our daughter's car seat when she's not in the car!
I could go on and on about our wonderful Dachshunds, but will stop here. We are all long time fans of your blog, Dixie and Duncan especially enjoy the videos! 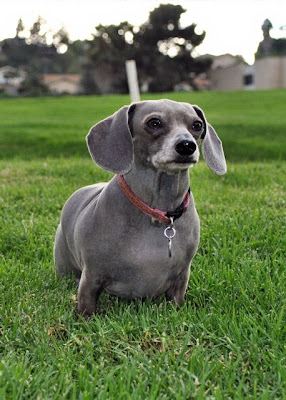 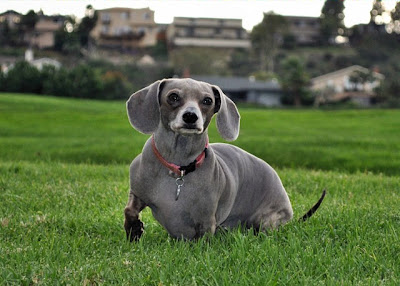 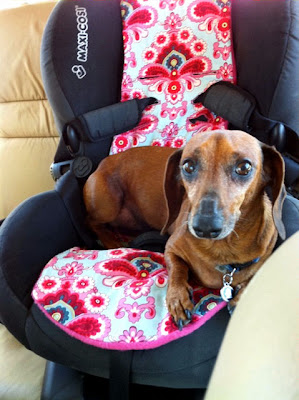 Duncan relaxes in the car seat
Posted by Rowdy and Bette at 9:03 AM

Great pictures of Dixie and Duncan. So nice to hear they have such a wonderful home.

Both Precious!!! I've never heard of that color either.

Very cool pictures! I had never heard of a blue dachshund! They look wonderful.