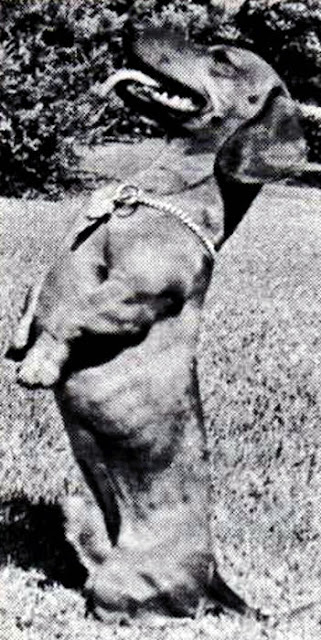 'Able'
In honor of Veterans Day, 2010, we pause and bring you this patriotic Dachshund tale:
Airman Apprentice Able, Red Smooth

for the American Dachshund magazine, January, 1966

What was I doing in the U.S. Navy with a Dachshund puppy?  That was a question I asked myself often during hectic, hair-raising months that NAVY WAYS EXCITME, better known as ABLE, was under my command(?) at Corpus Christi, Texas.
The U.S. Navy was happy to see me go, I'm sure.  In part it was due, I think, to a small, fiddle-fronted, snippy-nosed, round-eyed, red smooth male Dachshund - Able.
Able came from a nice home of well-meaning people.  He was supposedly the pick of the litter.  I bought him strictly because I couldn't fly home to Virginia on Labor Day weekend to see the Warrenton Horse Show.  Instead of drowning my sorrows at the Officers Club, I bought 8-weeks-old Able.
On Able's first night in the BOQ, I ended up sleeping in my raincoat on a bare mattress (how I remember those buttons!) with Able snuggled next to me.  He wasn't housebroken.
On one occasion I wasn't sorry about that.  I had left him in the bed, or so I thought, and had gone to the base movie.  During the movie a notice was flashed on the screen:  "Ensign Bachman, you are wanted at the BOQ immediately."  I left hastily.  My puppy was drunk.  He grinned, and he could barely wiggle.  I decided that he should walk it off, so I scooped him up and we walked, and walked, and walked.  Eventually, the night air had some effect.
This misdeed to Able had been done by some student pilots.  These "officers and gentlemen" had had a great time watching Able go from glass to glass, taking a lap of beer, a sip of creme de menthe, and swallows of several other concoctions.  Able paid the leading culprit back.  One night when said officer was sleeping off a heavy bout, Able slipped through the swinging doors and left something beside the officer's bed.  Just retribution.
When I was transferred to a jet squadron, Able went along.  He became the official mascot of  more than 300 men.  We were in "The Den of the Tigers," and Able was the official Tiger.  His life in the hangar was hectic.  Each morning we lined up for roll call.  Able never learned to sit and wait for his name to be called.  He would walk up and down the line greeting friends.  More than one enlisted man complained that Able had ruined his only clean pair of whites.
One day the Executive Officer told me that I had to get rid of Able.  He had been put on report too often.  I decided to get Able back to our farm in Virginia.
The time came when two Ground School Instructors were flying to Washington, D.C., to get in their flying time.  Yes, Able and I could go.  We set off in a Beechcraft.  It would take many hours, but at least Able was going to have a chance to live a normal, civilian life.  So sure was I of getting home that I took only a flight suit, and no money.  Unluckily, Washington was clobbered in by thunderstorms, so we ended up in Marysville, Tennessee.  We stayed there overnight, Able eating steaks at the Officers Club.  The next day we returned to Corpus.
There my military duties as Education Officer (I had been transferred to a more "lady-like" job) went by the wayside as I put my thoughts into getting Able home.
The time came when we could hitch a ride on an R4D.  The Admiral on board was a friend of my father's, so it was I, not Able, who had a huge steak this time.  At Washington, Able greeted my parents with a shrill bark.
Though Able held a lowly Airman Apprentice rating in the Navy and my father was a retired Rear Admiral, I'll give you one guess who was boss on our farm.
When I married, it was understood clearly that Able was included in the deal.  Able was flown to us in California.  He was No. 1 until the day I had to have him put to sleep.  He was the smartest, stubbornest, most lovable Dachshund I have known.

Woof, WOOF! Don't miss some incredibly amazing stories of Dachshunds and the military from the archives:

Dog Is My Co-Pilot Dachshunds and Veterans Day
Posted by Rowdy and Bette at 8:40 AM

Thanks for all of the wonderful links today, the day to remember those who gave their lives so that we can have the freedoms that we now have.

Both my father and my father-in-law served in WWII, my uncle in the Korean war.

This is a simply awesome post. Excellent job and so enjoyable!