Lacy, The Dachshund Who Saved His Life 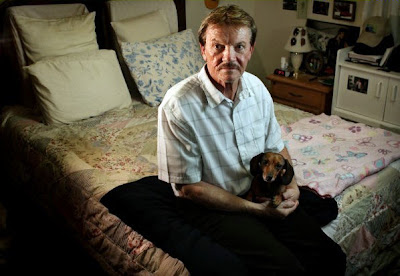 There's no denying that our dogs are there for us during the good times as well as the bad times.  And when things get really bad, the unconditional love of a furry friend has absolutely no boundaries - they can even save your life.  Such is the story of Robert Peay and his Dachshund 'Lacy,' seen here, who hail from Springville, Utah.
Peay struggled with depression after losing his wife to disease, a son to alcohol poisoning and a second son to suicide. Contemplating suicide himself, he prepared to get drunk and do it.

What saved him was a spunky toy dachshund, Lacy, whom he and his wife had adopted three years earlier. He knew that no one else would take care of Lacy, and he knew that she’d miss him.
“She’s the one that did it all,” he said. “We’ve been through a lot, me and her.”

Read the rest of this story at The Daily Herald.

We'll file this one under Dachshund Heroes.
Posted by Rowdy and Bette at 9:16 AM