RuRu Searches for his Home

It's not often that a disabled Dachshund looking for a home gets picked up by the local news service, which in turns gets picked up by CNN - RuRu must be pretty special.  Excerpt from WBBH out of southwest Florida:

"He's a very active dog, very friendly, loves everybody. Loves to jump up and down on his wheelchair as much as he can," said Michael Simonik of the Humane Society of Naples.
RuRu is paralyzed in the lower half of his little body. He was injured while living with a Rottweiler in LaBelle.
"They were playing one day and the Rottweiler accidentally stepped on the rear end of RuRu causing the damage," said Simonik.
The 4 year old daschund was too much to take care of, so his family put him in a shelter.
He was rescued by the Humane Society of Naples, a no-kill shelter specializing in dogs with special needs.
One week in and RuRu is making friends but still looking for a family.
"I think his personality alone will get him a home," said Jeanne Rivera of Naples.

If you're interested in adopting this little guy, check out Petango. 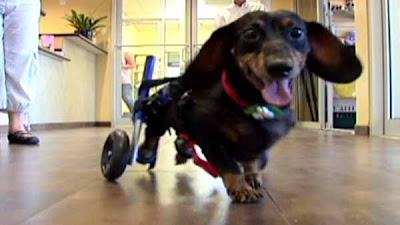 Whoa, Nellie!! The Doxie gets stepped on and paralyzed and HE ends up in the shelter??????? Somebody's got sum 'slpainin' to do!!

Good luck little RuRu in finding a furever home that deserves you.
Yeah, we agree Keren, "what's wrong with this picture"?

HOPE he gets a good home, poor little fella. He is such a angel, keeping RuRu in my prayers. Please
God help him find a loving home.

The story was posted today (11/29/10) that RuRu has been adopted and his new owners will be taking him home later this week.

Thaks Bludog for giving us this great news on RuRu's adoption. Way to go RuRu.