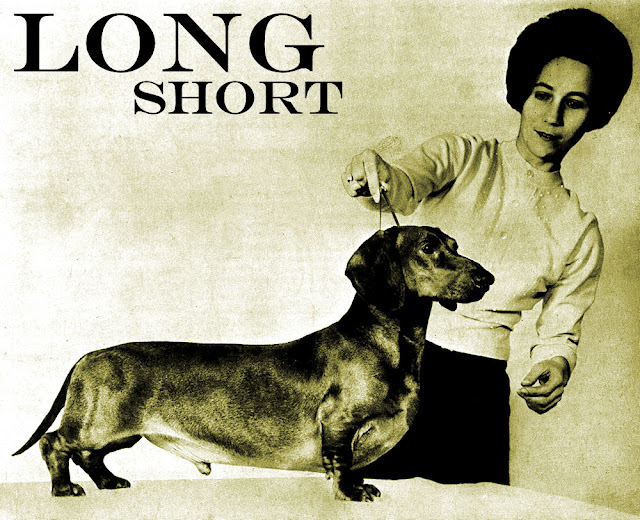 LIFE WITH DACHSHUNDS
by breeder, exhibitor and judge, George C. Spradling of Wichita, Kansas, for the American Dachshund magazine, January, 1966.

We do not know why we prefer certain people, dogs or things.  We like Dachshunds better than any other breed.  How do we justify it?  It's easy to sling out a long list of adjectives describing all of the good qualities (forgetting the bad) we attribute to them, but the same identical words could be used by another to justify preference for the breed that he loves.
We have owned Dachshunds for 30 years.  During this time we have also owned, in succession, Afghans, Collies, German Shepherds, Giant Schnauzers, Weimaraners, Labrador Retrievers, Border Collies, and all three varieties of Poodles.  Our preference for Dachshunds is not based on deficiencies in these other breeds.  On the contrary, they were all superior to Dachshunds in some characteristics - and vice versa.
Certainly it is not based on the abilities of Dachshunds to win dog shows, because they are on the lower end of the totem pole in that respect.  In all-breed shows our Poodles, especially, have run away from the Dachshunds.
In a period of five months we started a Poodle bitch, a Poodle male and a Dachshund male in the classes.  The bitch won five Best in Shows, the male three and the Dachshund one.  The Dachshund male was better in anatomy and structure than either Poodle.  He consistently won Groups, but only the one time did he go over either Poodle for Best in Show.  Most people and judges deem the large, especially the long-coated dogs, more handsome and, hence, more entitled to wins.
We really do not know why we prefer Dachshunds, but if we look at our life with a few favorite Dachshunds we will at least disclose their character and charm.

Not really related but always worth a second look if only for that Jimmy Stewart poem:  Life With Dachshunds
Posted by Rowdy and Bette at 8:08 AM