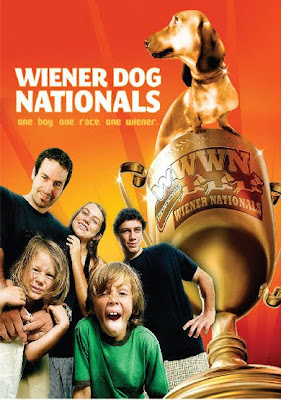 Fasten your seat belts, Dachshund fans.  In case you haven't heard, there's a new family film in the works called Wiener Dog Nationals. The film will be produced by Patricia Gillum of Two Boys Productions, Inc., and is written by Kevan Peterson.  The film will be distributed worldwide.
Here's a brief synopsis:  "Wiener Dog Nationals" follows the story of a young boy and his adopted puppy. After the loss of his wife, Phil Jack adopts a dachshund runt from a shelter to help ease the pain of loss for his young son. It turns out that "Shelly" and her new family are in store for a new adventure as they enter the nation's "Wiener Dog Race." One Boy, One Race, One Wiener.
Now, we know what you're thinking:  "But Joey and Maggie, we wanna be in the movie - how can we win a walk-on roll?!"
It's elementary, my dear Schatzie:  win a contest on Facebook!   To enter, a dachshund's Facebook profile must be created and must become a member of the Wiener Dog Nationals Facebook group.  The winner will be selected based on the most creative page, the largest number of wiener dog friends, the strongest character development, and the best video and photo wall.  The contest is from now until April 15, 2010 - so show off your Dachshund pride!
We'll do our best to keep you updated on the progress of this exciting new new film.  Find out all about it at the official website.  Woof, WOOF!!!
Posted by Rowdy and Bette at 9:11 AM

I hear that the Dachshund Club of America is opposed to any kind of activities like Weiner dog races because of the breed not being bred for racing . Some in the club consider this to be a form of abuse . What say you 2 guys ?

Hi Yahyamoro,
We don't think so. As long as it is not "organized" racing with betting, and as long as each dog's human is directly involved with the racing. There's nothing wrong with seeing who's dog runs to its human the fastest. It's not even really racing, the dogs are just running to their humans; it's all for fun.

The Board of Directors of the Dachshund Club of America, Inc. (“DCA”) first addressed the growing problem of Dachshund racing at Greyhound tracks and in other commercial settings in 1995. The problem arose as a result of a Miller Lite commercial which depicted two racing Dachshunds, and the problem was further compounded when the Miller Brewing Company undertook a public relations campaign sponsoring Dachshund races at Greyhound tracks. DCA was and is greatly troubled by any possibility of an association of Dachshunds with Greyhound tracks, which have historically been related to the mistreatment and the death of thousands of dogs. DCA therefore requested that Miller discontinue sponsoring Dachshund races at any sporting event, and also discontinue any future use of the commercial that depicted them. DCA notified its members of its new policy and counseled its members not to participate in these events.

DCA continues to maintain that racing is bad for the breed by encouraging the breeding of dogs for that purpose rather than as examples of the breed standard recognized by the American Kennel Club. Racing also encourages the misuse of dogs not suited for this activity: Dachshunds are not designed to be a racing breed, but rather to go underground.

As for "fun races" as long as it's on a grassy surface and the safety of the dogs is always kept in mind - many DCA dogs will participate in community type fun runs. Clubs just won't sponsor them. Joey and Maggie "get" it.

Thanks so much Doxie Mama! We've never read the DCA's official position on the matter before. Interesting, and certainly makes sense.
The only times we've ever been disturbed about Dachshund racing (in the 3 years we've been reporting Dachshund news) is when it is on ice, such as between hockey games, and F&F production races, which is not for fun, but for profit and show:

I hoping to see that movie!

My mini dachshund, Gracie, (and others) played the role of Shelly, in this movie. There were several dachshunds in this movie, playing various roles. It's sure to be a hit!!!