The Quest for the Perfect Dog 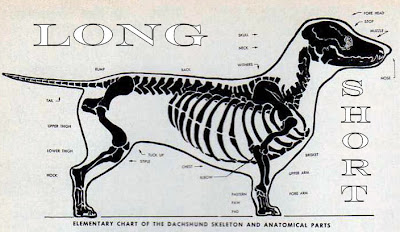 The BBC, the world's largest broadcasting corporation, has announced that it is reviewing its coverage of the Crufts dog show in light of a program which aired yesterday, Pedigree Dogs Exposed, that they commissioned on canine health. Excerpt from The Times: Two years in the making, the documentary shows many dogs suffering from genetically induced illnesses, including epilepsy, and compares practices at the 135-year-old club to Nazism in its emphasis on breed purity.
A spokesman for the club dismissed the idea as offensive, “not just to us but to the people who suffered at Hitler’s hands. What we are talking about is dog breeding – let’s get this into perspective.”
But the BBC fears it will not be able to defend its coverage of Crufts after the showing. A spokesman for the broadcaster said that it would be seeking a meeting to discuss “the impact of the matter raised by this film”.
Steve Jones, Professor of Genetics at University College London, told the BBC: “People are carrying out breeding which would be first of all entirely illegal in humans and secondly is absolutely insane from the point of view of the health of the animals. In some breeds they are paying a terrible, terrible price in genetic disease.” Read all about the drama at The Times. 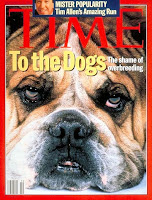 In lieu of being able to see the program yourself, check out Time Magazine's take on the topic in 1994's A Terrible Beauty. We're woofless.
Posted by Rowdy and Bette at 8:15 AM