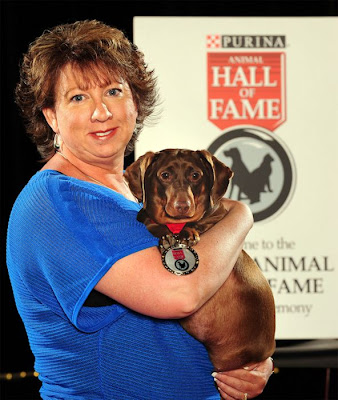 As one of the longest running pet recognition programs in Canada, the Purina Animal Hall of Fame has recognized the life-saving heroics of pets and service animals for more than four decades. Since its inception in 1968, 155 animals have been inducted - 128 dogs, 26 cats and one horse.  Yesterday, a smooth chocolate Dachshund named 'Bree,' who hails from Blissfield, New Brunswick, was one of four animals, three dogs and one cat, to be inducted for 2012.  We're so proud of you Bree!  Excerpt from Canada Newswire:

Last September, three days before owner Michele Gilks' 50th birthday, Bree, her two-year-old Dachshund, tried to wake Michele up in the middle of the night by putting her snout in Michele's mouth, licking her face and frantically digging next to her. When Michele finally awoke, she felt an overwhelming "drowning" feeling and began gasping desperately for air. Bree's antics also woke Michele's husband who called an ambulance at once. When the paramedics arrived, Michele was put on oxygen and rushed to the hospital due to her dangerously high blood pressure. At the emergency room, Michele was diagnosed with a severe case of sleep apnea - a potentially life-threatening condition that causes a person to stop breathing during sleep. This wasn't the first time Bree had woken Michele up from sleep in the middle of the night and now she understood why: Bree was helping Michele breathe whenever she stopped. If Bree hadn't been watching over Michele that night, she would have died in her sleep from lack of oxygen. Today, Michele is receiving treatment for her sleep apnea and Bree no longer wakes her during the night. Michele feels like she's been given another chance at life and she's eternally grateful to Bree for that gift.

"I was unaware that I had severe sleep apnea, but Bree sensed something was wrong with me immediately. Without her persistence to wake me from sleep apnea episodes, especially the severe episode last September, I wouldn't be here today," said Michele Gilks, owner of the two-year-old Dachshund. "She is my personal hero, and we're so thrilled that Bree is being recognized for her heroic efforts by the Purina Animal Hall of Fame."

Read more at Canada Newswire and visit the Purina Animal Hall of Fame to read past honoured stories.
Posted by Rowdy and Bette at 8:30 AM

What an inspiring story! And what a smart dog!

I hope there is another wake up call to Bree's owner. Bree is severely overweight and needs that health issue addressed... to save her life!