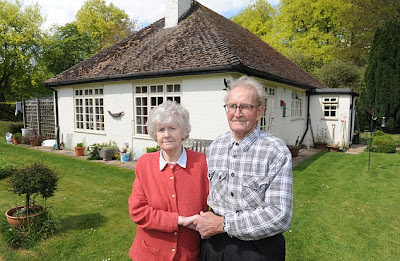 Upset: Bernard Taylor, pictured with his wife Joan, was washing up the dishes after tea when he looked out of the kitchen window and saw 'absolute carnage' in his garden

Uh Oh.  Somebody was a bad dog.  Meet Bernard and Joan Taylor, who live in a cottage on the 1,000-acre Tangley Estate, near Andover, Hampshire, UK.  They were watching the four chickens for a friend when the horrific incident occurred.  Excerpt from The Daily Mail:

Somehow, Mr. Taylor says, a dachshund from ‘the big house’ next door got through the hedge and killed all four birds.
Mrs Taylor was left in tears. She said: ‘The hens had been laying beautifully – four a day. They were so friendly. They clucked all day long.’
After the attack last week, Mr Taylor said he ‘went out, picked up a stick and hit the bloomin’ dog. He ran off right through our boxleaf honeysuckle hedge towards the big house’.
The house in question is owned by multimillionaire property developer Harry Marriott, who bought the estate for £6million in 2004.
It was previously owned by Tory MP Michael Colvin, 67, who died with his wife Nichola when the manor house was destroyed by fire in 2000.
Mr Marriott, 50, and his wife Dinah, 48 – a close relative of former Prime Minister Sir Alec Douglas-Home – built a new mansion on the estate worth £4million.
Mr Taylor, who was Mr Colvin’s gardener, and his wife have lived on the estate as tenants for half a century. The Colvins built their bungalow, Gardener’s Cottage, for them in 1961 and it stands within the estate grounds, a few hundred yards from the main house where Mr and Mrs Marriott live.
They claim the chicken killer was Willow, a dachshund belonging to the Marriotts.
Following the incident, Mrs Haynes said the Marriotts have agreed to pay her £130 – the value of the four chickens as assessed by her.
Yesterday a representative of Mr and Mrs Marriott confirmed that they own a dachshund and said they have tried to deal with the incident responsibly and as quickly as possible, given that Mr Marriott was abroad at the time.
He said: ‘Apologies were immediately proffered to the Taylors following the incident.
‘An offer to pay for the four hens was promptly made as soon as the value had been ascertained with the owner of the hens, who does not live in Tangley, as the Taylors did not know the value of them.
‘A cheque for an agreed sum has been sent to the owner to compensate her. Apologies were also proffered to the owner of the hens.
‘It is understood that Mr Taylor, who had erected a temporary chicken run, had let the hens out to roam the garden. Mr Marriott has subsequently freely offered Mr and Mrs Taylor as much chicken wire as they might require to keep their chickens in.’

We're glad to hear that the Marriotts did the right thing.  Read the entire story at The Daily Mail.
Posted by Rowdy and Bette at 9:00 AM

How about the filthy rich Marriots fencing their property so their little darling doesn't cause any more destruction?

We are breed for hunting after all. What were they thinking when they left chickens out of the pen, chickens, bunnys, squirels, all the same to us dachshunds.