Dog Is My Co-Pilot 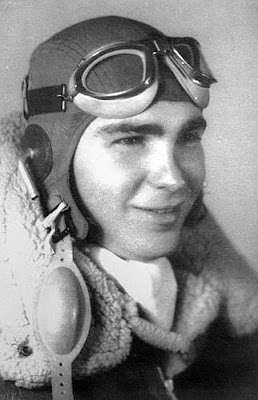 It's no secret that we love to profile stories of veterans and their Dachshunds around these parts.  Thanks to our Los Angeles pal 'Pee Wee' for sending in this story of U.S. Army Air Corps veteran John Waggaman of Rancho Mirage, California.  He talked briefly to The Desert Sun about his flying days and the Dachshund who served as his co-pilot; specifically the day he had to parachute out of his aircraft:
Waggaman, who landed safely on a sandbar, was thankful his canine companion wasn't on that flight.
“That was the one day I didn't take my little dog,” he said.
Waggaman's dachshund — he picked up the little guy while he was on leave in Darjeeling — accompanied the pilot on a couple of missions.
“He'd just lay down between my feet,” he said.
He named his new dog Major, after a dachshund he had in Santa Barbara when he was a young boy.
Things could have ended ended differently for Waggaman if Major had been riding along that day.
“I probably would have tried to land the plane on the sandbar,” Waggaman said.
Waggaman said he didn't think he'd be able to hold on tight enough to Major when the parachute snapped open.
“That would have probably jolted the dog right out of my arms,” he said.
It took Waggaman a few days to rejoin his group, and during that time, Major lost his appetite.
“He wouldn't eat until I got back,” Waggaman said.
Read more about Mr. Waggaman's missions at The Desert Sun.
Related:  A Dachshund Memorial Day 2010
Posted by Rowdy and Bette at 7:54 AM