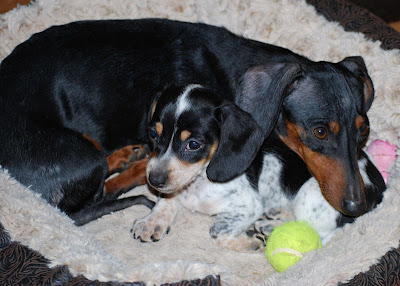 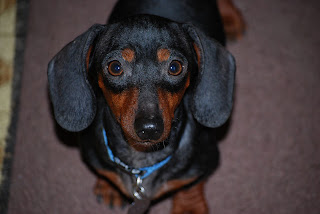 Remember the recent heartbreaking story of 25 dachshunds which were rescued from a hoarder's home in Georgia? Well, thanks so much to 'Richard and Anna' for an update on 2 of the rescues!

Hello Long and Short of it All! On January 16th you did a feature on 25 Dachshunds that were removed from an elderly woman's home. Little did we know that when we read that story 2 of these girls would be finding their way to our home in PA. We are foster parents for All American Dachshund Rescue that took in some of these doxies. The top photo is of a girl named "Sweet Georgia Brown". She lost her own litter of pups right about the time this one was born...so when she came to our home as a foster she took to this little one like it was her very own. The second picture is of Bella who was adopted out to a wonderful family just yesterday. We thought maybe everyone would like an update, so we wanted to share these sweet girls stories with you.

Dachshund Lovers make great things happen. From the comments of the original story, Kristin noted that Dream Dachshund Rescue also took in 6 of the dogs. Such wonderful work.
Posted by Rowdy and Bette at 8:50 AM

Thank you very much for the update, I was wondering what had happened to those dogs. We've got such good rescue organizations in the dachshund breed, we're so lucky.

Oh my gosh, what cute photos. That puppy is to die for. Glad to hear he got a new mom!

What a cute girl!