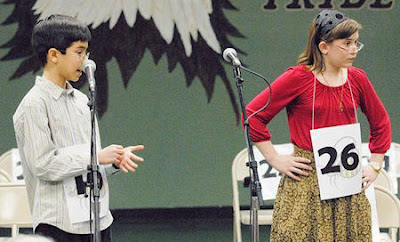 How do you spell "Dachshund?" Answer: W-I-E-N-E-R-D-O-G. Or is that W-E-I-N-E-R-D-O-G? Regardless, last year's spelling champion Meredith Young, right, doesn't look so pleased after misspelling "dachshund" as soon-to be champion Austin Crane correctly spells the same word while tracing each letter onto his left palm during the 40th round of the Coconino County, Arizona, Spelling Bee Saturday morning.
Excerpt from the Arizona Daily Sun: From Round 12 to Round 38, they battled toe-to-toe: defending champion Meredith Young vs. newcomer Austin Crane.
No one else was left in the 2009 Coconino County Spelling Bee. Meredith, poised and confident, and Austin, ghost- writing words in his palm, rolled through words such as "ameliorate," "pernicious" and "ersatz."But in Round 39, it was the veteran who stumbled. Meredith, a home-schooler, misspelled "dachshund," leaving Austin, a sixth-grader at DeMiguel Elementary School, all alone with the final word.
Read more at The Arizona Daily Sun. Congrats Austin, and don't worry Meredith, most of the dachshund owners on this planet couldn't spell it either, if it weren't for spell-check.
Posted by Rowdy and Bette at 10:13 AM

Cute story! Thanks! I'm more curious, though, about the preferred spelling of weiner/wiener. What do Maggie and Joey think? Perhaps you will take a poll of your readers?

Thanks! We're pretty sure the correct spelling is WIENER. The hot dog blog has it all figured out: http://hotdogblog.com/modules/smartsection/item.php?itemid=20