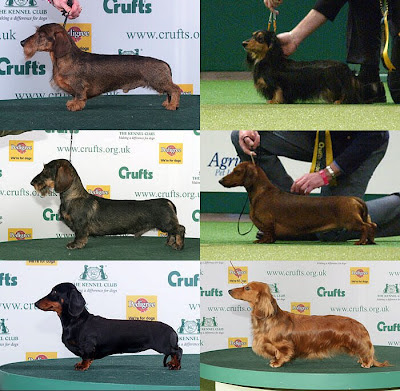 Last year's dachshund champions from Crufts: smooth, wirehair, longhair; minis and standards (click photo to enlarge)
With just about a week to go before the 2009 Crufts Dog Show, more drama around pedigree dogs is surfacing across the pond in the UK, and this time it involves miniature dachshunds. As we recall, the broadcast of the UK television program Pedigree Dogs Exposed has resulted in the BBC canceling its coverage of Crufts, dog welfare groups RSPCA and Dogs Trust pulling out of Crufts, and the pet food company Pedigree ending more than forty years of sponsorship of Crufts.
Now Jemima Harrison, the producer of Pedigree Dogs Exposed is back in the news with headlines about "Size Zero Dogs", saying that miniature dachshunds are deliberately deprived of food and water prior to weigh-ins at dog shows. Excerpt from The Telegraph:

The row centres on Miniature Dachshunds, which breeding guidelines state must be no heavier than 11lbs – a limit drawn up in the days when the dogs were sent down rabbit holes.
The Kennel Club has banned weigh-ins for the breed at Crufts in response to fears that owners were denying food and water to dogs in the hours before they were due on the scales. It has also relaxed the regulations for other shows, leaving it to individual judges to choose whether to hold a weigh-in or not.
It recommends that bowls of water be provided to prevent the dogs from dehydrating but critics say this has done nothing to stop the problem.
"This is Size Zero for dogs," said Jemima Harrison, producer of a BBC documentary which in 2008 exposed breeding techniques which led to genetic illnesses that affect pedigree dogs.
"I am inundated with owners and judges who say they are seeing dehydrated or malnourished dogs on the scales, all for the sake of a rosette. It sounds funny to think of dogs having the same issues as fashion models but it is a serious welfare issue.

Read all about it at The Telegraph.

Related: BBC Cancels Crufts Coverage
Posted by Rowdy and Bette at 9:01 AM

To sacrifice the dog to win a trophy doesn't say much for responsible ownership and breeding. Hooray for my Rescue Weiners! They are not champions...just fed, watered, and loved!

I found your blog through BlogCatalog. Feel free to come by mine and leave a comment! Would you be interested in linking sites?