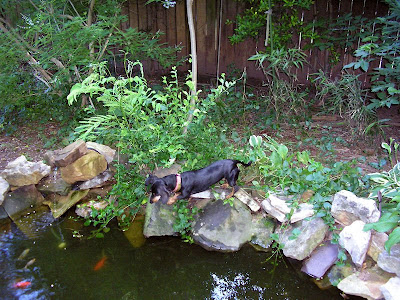 Polly Hunts Goldfish
We love to hear about the special dachshunds that touch our lives. Get ready to meet beautiful smooth black and tan rescue 'Polly,' who hails from Huntsville, Alabama - another great rescue who found her perfect forever home. Thanks so much to her mom Nolen Clark for sending in her story!

Polly had been a puppy mill breeder dog & apparently had never played outside. She took to digging immediately, and I let her. Now she hunts, studies goldfish, helps me garden, cuddles, bosses around 2 large GSDs (German Shepherds), suns, and all things doxie.

Poor thing had had so many puppies, last year she need mesh for her hernia repair. She also has worn down her canines from chewing desperately at her metal cage. Luckily Southern Dachshund Rescue, rescued her & gave her foster care until we were matched.

Yes,older doxies do bond tightly. Took little time & no time for her to establish her alpha status. She actually bit my male GSD on the ear & the issue was settled. Now she bosses them around but chooses to cuddle with the male "plushie" when it's cold enough-- not that she doesn't have a daybed with 5 blankies and at least that many pillows. (We use aerobic steps, so she doesn't have to jump so high.) Wasn't long until she gave up the comfort of a kennel for the softness of blankie and pillows-- the more the better. And best yet, cuddling with me with her warming, softly snoring nose blowing right in my ear.

Last week, I thought she was dying. She was without normal responses and reactions. Luckily, it turned out to be "rib eye disorder'-- the little sneak has stolen two thick ribeyes from the grocery bags & eaten about 25% of her body weight-- 24 hrs later she had distended tummy & I found her reactionless. A few pills and loving vet later, she blasted out the back door the next morning, to inspect the goldfish and those darn koi. 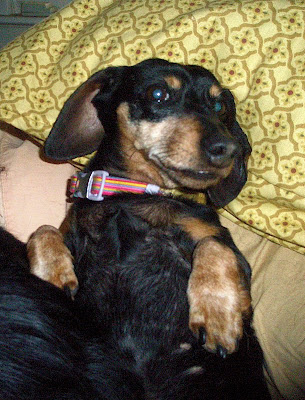 she hunts the fish! thats so cute.

Thanks for sharing Polly's story. She's adorable. Thanks for taking such good care of her.

got a fantail once, then decided it lacked the proper doxie sushi flavor!