The World Records Academy is claiming that 'Chanel,' seen in this photograph, a blonde wire-haired dachshund from Port Jefferson Station, NY, born May 8, 1988, is the oldest dog in the world. Believe it? Your Long and Short of it All hosts tend not to. We've met 20-year-old dachshunds at dachshund meetups. One of our dad's co-workers' 24-year-old dog died last year, so dogs older than 20 can't be that uncommon, right? The dog at this link turned 29 last year.

Besides, that's not even a wire-haired dachshund, that's an English Cream.....puppy. As a matter of fact, we'd recognize that dog anywhere, that's our good pal 'Honey,' the pretty girl whose human is prolific photographer DoxieOne over at flickr. 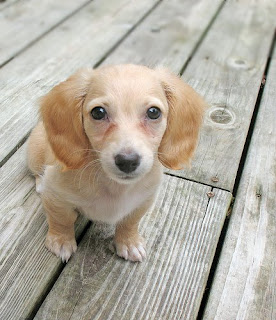 Here's the original flickr photo. Make sure to check out more photos of Honey over in her flickr set.

This of course begs the question, who's the oldest dog you've ever met? Ever owned a dachshund to be 20 or older? What was your secret to longevity?
Posted by Rowdy and Bette at 9:09 AM

That is quite funny - given that you can tell that pic is of a puppy.

I don't know of any dogs older than usual but my Lilli is going to live forever! Of course ;)

Thanks for letting me know about this. I am in the process of 'talking' to them.

I had no idea dogs (especially Doxies) could live to be 20 and beyond. You made my day. My 14-year-old Darby is in his prime not his golden years!

Doxies can make it to 20,I had one that made it to 20 years 2 months and 2 days. Might have been that she thought she was a pit bull. We decided that she was a new breed which we called a pit daschund.

My lovely long haired red doxie made it to her 18th birthday but passed away just after that. They love us so much they just don't want to leave.