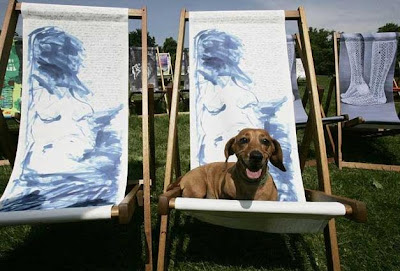 Proving once again that dachshunds are taking over the world, here's the latest wiener dog news from all over the globe! Woof! Above, sun-drenched red smooth 'Charlie' was one of the first to enjoy an exhibition of deckchairs unveiled in London's Hyde Park yesterday, each one dreamed up by artists and celebrities including Tracey Emin and Joanna Lumley.
The colourful designs, launched by the Royal Parks Foundation under the name Deckchair Dreams 2008, are part of a collection of 700 chairs produced to raise money for the capital's eight Royal Parks. Read all about the exhibition at The Independent. 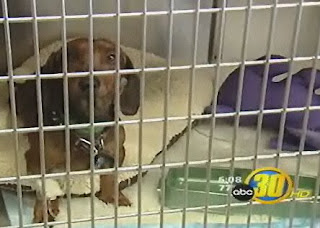 Red smooth 'Shane,' from Fresno, California, is still a bit shaky at the emergency vets after eating snail bait in the garden, but he should be fine. Vets are sounding the alarm to watch out for snail bait, after 7 dogs were treated for poisoning on Tuesday night at just one practice. One dog who was brought in comatose did not make it. We hope you're feeling great today Shane. Read all about snail bait toxicity, watch a video, and find out which brands are safer for pets at ABC30. 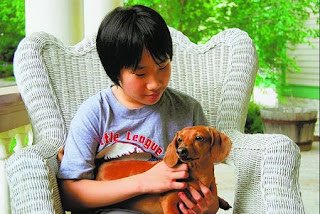 In an article explaining why dachshunds are the perfect dog (didn't we already know this?), red smooth 'Ginger' sits with one of her humans, Ben Chung, of Cincinnati, Ohio. "She's long, short, small and easy to pick up," said Ben, who likes to play fetch with Ginger.
Ben admits Ginger is somewhat territorial and can be slightly bossy. He and his sister don't seem to mind, though.
"She's sweet," said Rachel. "She (also) thinks she's a cat." Ginger has a feline tendency to lie in the sun, Rachel said. Read all about Ginger at The Community Press. 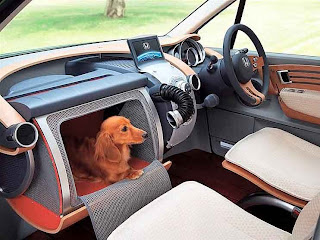 Talk about traveling in style.....there are now more dogs in Japan than children, and auto makers are taking note. Above, The Honda W.O.W. concept car changes the glove box into a dog box for pets on the move. Honda has a site called HondaDog, Toyota has a rival site, and even American independents are joining the cause with Dog Cars. Read all about it at Reuters.

Have a great Friday, and happy travels!