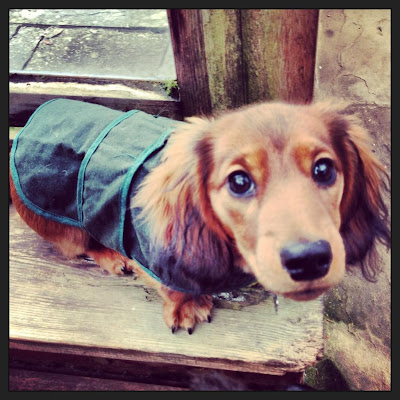 What a cutie
Our hearts go out to the family and friends of Alan TBH Plumptre, aka 'Alan,' who had a day job at UK's Tatler magazine, which focuses on the glamorous lives and lifestyles of the upper class. Alan met his fate in a horrible revolving door accident at the magazine's office in central London.  Via The Independent:
Staff at the high-society magazine Tatler are in mourning after their in-house dachshund came to a grisly end, killed by the office revolving doors. Alan TBH Plumptre, a hound often ferried in the best designer handbags, was doted on at the monthly publication and had gathered 2,500 followers to his own Twitter account.
Eyewitnesses said that Alan’s last hour was spent outdoors, taking a walk with a Tatler underling.
When the dog approached the revolving door at Vogue House, he saw a man walking through and bolted towards him.
Alan tried to rush through the revolving doors but got his neck caught. The male worker also became stuck in the door.
Two fire engines rushed to the plush Hanover Square offices, where onlookers crowded round the accident scene.
A team of ten firefighters freed the man. However they could not save Alan, who was pronounced dead at the scene.
Jennifer George, who owned the dog and is Editor’s assistant at Tatler, tweeted: “Yesterday my tiny much loved man Alan passed away in a tragic accident. Thank you to all that were there to help, all the kind wishes and all who followed @TatlerAlan.’”

Read more at The Independent, or check out The Daily Mail for more photos and a video.  Alan's twitter:  TatlerAlan.

Thanks to Christopher Derer for sending in links to this sad story.
Posted by Rowdy and Bette at 9:00 AM

Oh my goodness! How very sad a death for such a cute little fellow! My heart goes out to everyone involved.

Rest in peace, Alan. May everyone that loved you be comforted by the memories of your doxie antics. I also hope that the worker that took you for your walk knows that your accident was not her fault. Some things just happen.

My doxies of long ago -Gretchen, Hildegarde and Missy- will greet you at the Rainbow Bridge.

So sad at your tragic loss, Alan as are your many fans around the world. Spread your joy for life at the rainbow bridge. As to the poor person I hope she gains perspective on what happened but I know from experience she will always feel responsible. Sympathy and prayers for all close to this tragedy.