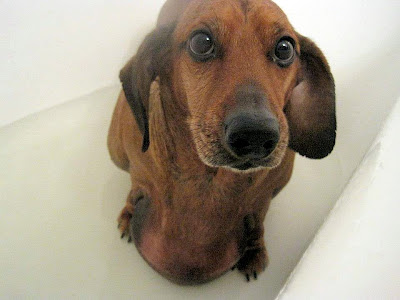 Splish, Splash!  Obie from his facebook page
We're quite sure that you recall Obie, the Obese Dachshund who has been at the center of a custody battle between his foster mom, Nora Vanatta, and his rescue group, Oregon Dachshund Rescue.  Lawyers and all involved met yesterday and it has been agreed that Obie will stay with his foster mom permanently.  Excerpt from Oregon Live:
Attorneys from both parties confirmed the settlement but said a confidentiality clause prevents them from commenting publicly on the terms of the agreement.
“Even though there’s a lot more to it than that, that’s the most I can say,” says animal law attorney Geordie Duckler, who represents Oregon Dachshund Rescue. “The terms of the settlement I can’t disclose. The only term we’re agreeing we can disclose is that Vanatta keeps the dog.”
The case was resolved relatively peacefully, and both parties are going their separate ways, says James McCurdy, who represents Vanatta.
Vanatta, an emergency medical technician who worked previously as a certified veterinary technician, took in the dog in August after responding to a plea from ODR. She promptly put him on a diet, and his weight-loss plan attracted national attention, including an appearance on the "Today Show" in September.
In October, ODR filed suit in Washington County Circuit Court, demanding that Vanatta return Obie to the rescue.
ODR founder Jenell Rangan claimed that Vanatta was supposed to take the dog only on a temporary basis. She maintained that Vanatta exploited him because of his weight, and failed to provide proper medical care for him, putting his public persona above his health.
After hearing testimony from both parties, a judge ruled at the October hearing that Obie should remain with Vanatta temporarily because he had no evidence either side could prove ownership. Obie has been staying with Vanatta since then.


Yes, you have heard correctly that a settlement with ODR has been reached. Obie went to his lawyer's office today and made it official. Today is a wonderful day in Obie's journey. Obie gets to stay with me and his brothers and continue his legacy. I cannot discuss the details of the case and ask for respect with that piece of the settlement. I know Team Obie will be happy to continue to support his journey to a healthier dog. Here's to the next stage of Obie's life! Thank you all for your amazing and endless support!

Obie has lost an astounding 28 pounds since he has been fostered.  He most recently weighed in at 49 pounds, down from 77.  Keep up with Obie at facebook.

I was wondering about that little guy just a few days ago! Great news.

He's really looking good! They had a recent pic of him on FB, and he is *just* starting to showing a waist indentation.

At one time, a standard dachshund of 49 lbs wouldn't be too overweight at all...They used to invariably be between 30-40 lbs. I'd hate to think of the little bitty 18-22 lb "standards" of today tackling a fox or a badger!

Every now and then an old style standard dachshund puppy shows up,in a litter of typical standards. People usually can't believe they're true dachshunds, thinking they're dachshund/bassett mixes or something, but they're throwbacks to what was the dachshund norm. I wonder if slipped disc was more or less of a problem for the 'robust' weiners of yesteryear?

That is great news. He is in good hands. I hope now that all can get back to the true reason for dachshund rescue - to find wonderful homes for those that need them.

Wonderful news and outcome for Obie, wishing him many more fabulous years of life!