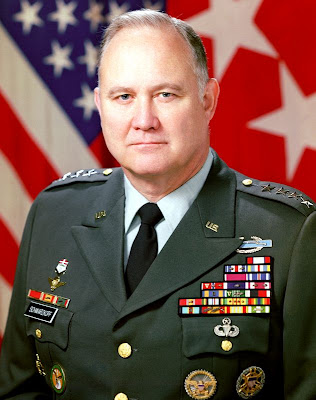 Our hearts go out to the family and friends of Norman Schwarzkopf, Jr. who passed away December 27, 2012 in Tampa, Florida, at age 78. Mr. Schwarzkopf was a United States Army general who, while serving as Commander of U.S. Central Command, was commander of coalition forces in the Gulf War.  With all politics aside, when notaries pass, we often have to ask ourselves "were they a Dachshund Lover?"
Well, it turns out that he was.  Mr. Schwarzkopf had a beloved wire-haired Dachshund who responded to the name of "Grizz."  Mr. Schwarzkopf would later reference Grizz in lectures on leadership, this one in 1996:

"People say to me, `you've got a lot of nerve talking about leadership,'" he said. "`You're talking to very successful business people who are obviously leaders,' and many of you in the student body are leaders."
Schwarzkopf debunked the myth that people must be born leaders to be effective.
"There is no such a thing as a born leader," he said, "They are made."
To illustrate his point, Schwarzkopf explained how Grizz, his "wire-haired Dachshund who weighs 15 pounds and looks like a dust mop," is the "undisputed leader in the Schwarzkopf household," and his other dog, a 90 pound well-bred German Shepherd, is not.
"Grizz has never looked at the mirror," he joked.
"It doesn't matter whether you're tall or short, or whether you're brilliant or not... if you start thinking like a 90 pound German Shepherd then by-golly you are going to be a leader," he said.
Posted by Rowdy and Bette at 6:49 PM

You served your country well. RIP