A Note From Joey and Maggie: Maggie's Big Day 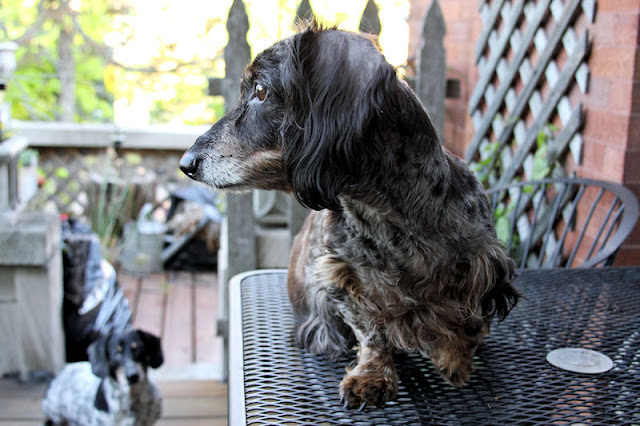 Maggie, May 24, 2011
The day has finally arrived - your Long and Short of it All hostess 'Maggie' gets to have her anal tumor removed, so we'll be a little short on the posts for a few days.  She's also going to have a dental while she's under; she's got a slab fracture which will most likely be removed.  It's a risky surgery for her - she's 10.5 years old, she's got Cushing's disease, a heart murmur, and she just had a pancreatitis attack about 2 months ago.  The pancreatitis is what we're worried the most about - surgery can cause pancreatitis to flare up, the same way Joey developed a really bad case after his bilateral adrenalectomy last fall.  Her lipase levels, which indicate pancreas issues, are still about twice normal, but the good vet doesn't see that as an issue - they need to be really high to indicate pancreatitis.   All precautions are being taken to prevent a flare-up, including heavy hydration before and after surgery until almost 8 PM tonight.  She should be able to come home tonight if all goes well.
In this photo you can see how Cushing's is taking its toll on our Mags.  While she is groomed with a modified cocker cut, her hair stopped growing last fall.  She used to be fully grown out again in about 2 months, but her last cut was in September.   People keep commenting that her hair is turning more brown, but we think that's because it is just so thin from hair loss.  Her legs have been shaved for IV placement from when she was in the hospital for the pancreatitis.  She's also losing the hair on the back of her ears - her skin has become scaly from the Cushing's, and the hair falls out.  And you can't see in this photo, but her stomach is very large - she looks pregnant.  She also has extra fatty deposits around the back of neck.   One of our good friends at our local Dachshund meetup didn't even recognize her in March - she said "This isn't Maggie, is it?"  :(
But the good news is that she's really close to being stabilized on her trilostane treatment for Cushing's.  She had an ACTH stimulation test last week, and her resting cortisol was 2.2 which is right about where we want it, (before it kept coming in at over 10), and her post test cortisol is about 9.5.  We'd like to get that post test number down just a little to maybe 7.5.  So, we upped her medication just slightly.  Hoping to see hair growth and decrease in the pot belly soon, but sometimes that just doesn't happen.  At least she's been very happy and spry since her levels have been good - she runs around the house like a puppy, and when she gets excited she bucks like a little bronco.  We're hoping that her good demeanor is indicative that she's going to sail through this surgery without a single issue, and she will be comfortable enough in her nether region that she can wag her tail at full force once more. 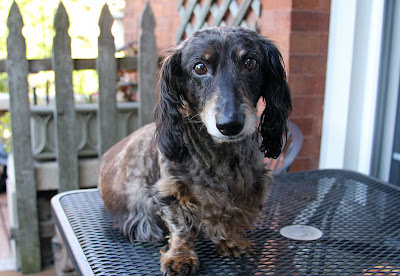 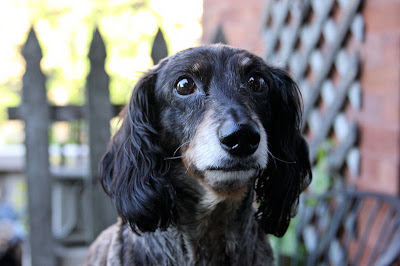 Who's a pretty girl?
Posted by Rowdy and Bette at 9:36 AM

We are sending love and good wishes to Maggie and will be thinking of her all day! Good luck and keep up all of the love and attention you have been giving to your sweet pups! They love you and know you are there for them.

Sending you lots of doxie wags and kisses today Maggie. Wishing you a very quick recovery and lots of extra spoiling. Macy

I'm send you both warm wishes and good thoughts and I'm hoping for a painless and full recovery for Miss Mags. A positive spirit and lots of love and support do wonders after surgery for everyone--human or canine--and it sounds like Maggie has both in spades!

Hair loss or no, I think she is still quite the glamorous girl! Nothing can dampen the sparkle in her eyes!Hope you weather the next few days with as little stress as possible given the circumstances. You and Maggie will be in my thoughts!

Oh, we feel so bad. Here we were, just celebrating Sawyer's "good" news regarding his recent needle aspiration biopsy's inconclusive findings (better than the many mast cell findings of the past), and now we are extremely saddened to learn of Maggie's complicated health issues. We never met Joey and Maggie, yet we feel a deep connection with them and truly hope for the best for your special duo, with extra healing thoughts being sent for beautiful Maggie at this time.

~Shar with Sawyer and Abby

Maggie, you are gorgeous. Hope all is well and you are back at home tonight.
Sending tonnes of get well rayz your way.
Love Ruby & Penny

Who is a pretty girl?...MAGGIE is!! Such a sweet, expressive face.
Wishing all the best for successful surgery and a full, speedy recovery.

We're sending good thoughts and healing wishes for Maggie's surgery! Our Zach had many of the same symptoms with his Cushings: the fatty tumors on his neck, the extended belly, the hair loss, but after a year or so on the trilostane, his hair actually grew back in! He never lost the pot belly or the tumors, but he did get his hair back. But he was a handsome boy to us, regardless, and Maggie is still a beautiful girl too.
Nelly, Minnie, Kirby, Henry and Mom Lyn (the San Diego dachshund crew)

Oh Maggie....Molly sends you best wishes from the DC area. We will be thinking of you (and your fam).

With dachshund hugs,
Molly in McLean

Hi Maggie! Be a good girl and get better soon! I'll take care of the barking at random people, birds, squirrels and vehicles while you're not feeling so good. Much love from Mina in MI, the mini-dox ruler of the neighborhood.

Oh our poor Maggie. When I saw her in march all that came across ws her sweetness and her beauty. John and Ozzie send healing and comforting thoughts and prayers her way and to her brother Joey and Dad Carson. May the Good Lord see her through all of this to brighter days ahead. we Love you Maggie. All our best. See you at the Luau. John & Ozzie

Best wishes for a speedy recovery pretty girl. You can do it! There is still much fun to have and shopping to do!
-Reese and Rusty from RI

Hang in there, Maggie. Your hundreds of fans are all pulling for you!
Get better soon, please!

Aw Maggie! Milo and I wish you the best with your surgery. We'll keep our paws and fingers crossed for a speedy recovery!
You're such a beautiful girl!

Maggie is such a beauty, inside and out! Jeeve and I send love, hugs and kisses galore. One of my favorite meet-up activities is getting to gaze into maggie's eyes and give her ears a little rub. That only lasts until poppa Carson's lap is free! I love that Maggie will humor me and that Joey shares his big eyes. Love to you all, our human and canine energy is with all of you.! Melinda and Jeeves

Dean and I will be thinking of you Maggie.

Maggie: We are all pulling for you to have a speedy recovery!

May God Bless you Maggie, and keep Carson and Joey comforted as you undergo yet another challenging procedure. As always, you are all in our prayers, and we hope all goes well and that you are soon back home in the comfort and loving company of your brother and Dad. With loving prayers, Jayne and Annie

Get well soon Maggie!! with loads of love and good wishes from the Museum crew!

Hope you are doing well, Maggie! Get well soon!

All the best for Maggie and a hug for Joey, too!

We won't rest until we hear the good news we know will come following surgery. Maggie is a beauty in our eyes.