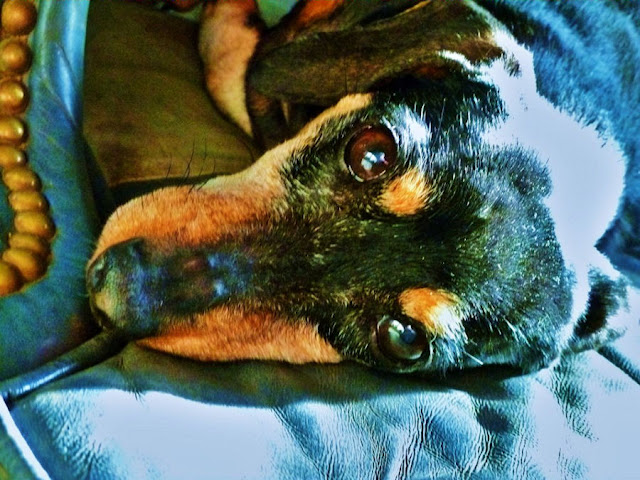 It breaks our hearts to report the passing of Irene Nolen Clark and her pal 'Polly.'  Irene was a long-time supporter of The Long and Short of it All, sending us dozens and dozens of stories about Dachshunds, and her own smooth black and tan rescue 'Polly.'  We hadn't heard from her in some time, and especially wanted to make sure she was OK after the recent tornadoes in her home state of Alabama.  We tried to email her and checked her facebook; she passed away on November 21, 2010.  We inquired to her brother about her beloved Polly, and her vet recommended she be put down due to cancer.  Nolen also had two GSD's which have been re-homed and are doing well.
Long-time readers of this site will surely remember 'Polly,' the goldfish hunter who later added rats to her repertoire.
Above is the last photo that Nolen sent us of Polly in September of 2010.  It's just beautiful.
Nolen left us with these words on her last facebook post in November:  I wish my friends the happiest holiday season ever, with all the love the world has to give. Nothing is better than friendships and dog-ships.
Posted by Rowdy and Bette at 7:17 PM

The best news this has to offer - Irene and Polly met at the bridge. There is no doubt that animals have a life force within them, and Irene didn't have long to wait before Polly came bouncing up to meet her with kisses and tons of love.

So sad. My other favorite blog that I read had her dachsie pass this past weekend. She made a neat video on him. My little Wiston - rest in peace. Maybe he is playing with Polly in heaven right now... http://www.youtube.com/watch?feature=player_profilepage&v=ag6a7Sp99jA