A Dachshund Custody Battle: 'We can't live without him', say Bailey's Humans 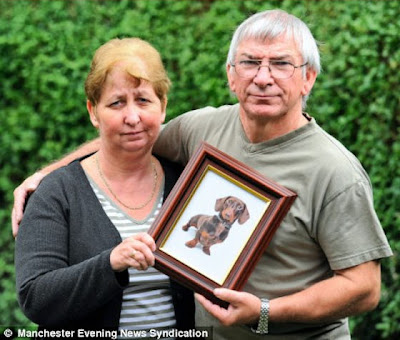 Nothing like a little hot drama to spice up your week.  Meet Gary and Moira Rowlinson who hail from Offerton, Derbyshire, UK.  They are holding a picture of their beloved smooth chocolate 'Bailey,' who they gave to family friend Steven Spencer, after Bailey bit their 2-year-old granddaughter.  They realized their mistake the next day and asked for Bailey back, but Mr. Spencer refused.  Now it's going to the courts.  Excerpt from The Daily Mail:
Now, in a bizarre and bitter tug-of-love custody battle, the fate of Bailey will be settled by a judge at Stockport County Court on June 2 after Mr Rowlinson decided to take legal action to get his pet back.
Mr Rowlinson, a joiner from Offerton, said: 'Bailey is a great dog. We can't live without him. We fell in love with him the moment we saw him. Bailey is one of the family. We'd be devastated if we didn't get him back.
'Normally, he is very playful but he is very protective of my wife and when my granddaughter came running up to her Bailey didn't realise what she was doing and bit her. We are distraught.'
Mr Rowlinson, who will represent himself in court, submitted an application to the courts under the Return of Goods Act.
He has even offered to fork out more than the £700 he originally paid for Bailey just to get him back.
Mrs Rowlinson, 56, said: 'Our children have grown up so Bailey is like a child to us.'
Mr Spencer, of Heaton Chapel, will be represented by a solicitor at the hearing. He declined to comment.

Read all about it The Daily Mail.
Posted by Rowdy and Bette at 9:01 AM

how sad ! For Bailey! How could they just give him away like that. If he is truly like a child of theirs , did they give away their kids when they made mistakes?

I love and adore dachshunds, and have had them in my family for over 30 years,sorry Baileys you didn't,t know him well and didn't,t research the breed, he made a loving mistake and then you banish him,but oh! now you have tears and want him back.did you toss your children from pillar to post when they did wrong