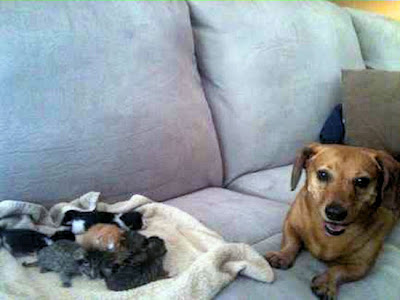 Your dose of Friday Cute - it's a short little story, taken in its entirety from  South Mississippi's Sun Herald:

It wasn’t unusual to see J.J. come through his doggy door. After all, it was there just for the beagle/dachshund’s use.
But Crystal Crawford of St. Martin was surprised to see what was in her dog’s mouth Thursday.
“He was carrying a kitten in, very gently,” she said. After carefully placing the kitten on the floor, J.J. went back outside and returned with another.
Eventually, the dog brought in six tiny kittens, to his owner’s bemusement. Crawford and her son began looking for the kittens’ mother, but a search along the road revealed nothing.
Meanwhile, J.J. began displaying some very nurturing tendencies.
“He would lie next to them and lick them, like their mother would have,” she said.
J.J.’s concern was strong, but not enough to save the kittens.
The veterinarian who checked out the kittens told Crawford they had been alone in the woods for too long, and there were other complications. They died over the weekend.
J.J. is still a hero in the Crawford household.
“He did his best for them,” his owner said. “He’s my hero dog.”

Awww. He sure tried. Bless his heart.