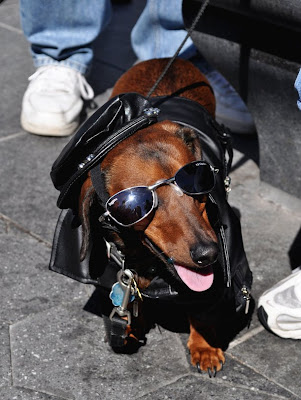 Congratulations to New York's Dachshund Friendship Club for hosting their 20th Annual Dachshund Octoberfest on Saturday in Washington Square Park in New York City.  This bi-annual meetup is an Institution in Dachshund Meetups, of which Dachshund meetups all over the country and world are modeled after and compared to.  It has brought some of the best photos and videos of Dachshund gatherings on the net.  Excerpt from Washington Square News:

"We do it twice a year as a social gathering for owners and dogs to interact and also see all the different varieties of dachshund, such as wire, smooth and long-haired," said Adrian Milton, who manages the event as part of the Dachshund Friendship Club.
At 1 p.m., the group joined together to sing "Dachs Song" by Paul de Vries, a song that encompasses all things loved by dachshund owners. The final lines read "Dachsie, meine dachsie, the best canine under the sun, called 'wiener' or 'sausage' or 'hot dog,' we know that you're number one."

Read more and see more photos at the Washington Square News.  And let's give that "Dachs Song" another listen, along with some scenes from the 2008 Octoberfest:

When is the next one email me at nathalie_mercedes@yahoo.com