Dachshunds In History: The Little Hindenburg 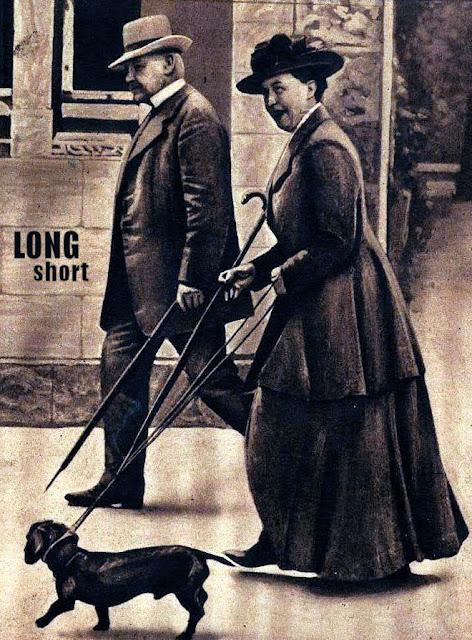 Who?  You've heard that name forever linked to chaos and catastrophe - oh, the humanity - but this is about the man, Paul von Hindenburg, as seen here with his wife and his trusty Dachshund dog.  Via wikipedia:

Paul Ludwig Hans Anton von Beneckendorff und von Hindenburg, known universally as Paul von Hindenburg, 2 October 1847 – 2 August 1934, was a Prussian-German field marshal, statesman, and politician, and served as the second President of Germany from 1925 to 1934.
Hindenburg enjoyed a long career in the Prussian Army, retiring in 1911. He was recalled at the outbreak of World War I, and first came to national attention, at the age of 66, as the victor at Tannenberg in 1914. As Germany's Chief of the General Staff from 1916, he and his deputy, Erich Ludendorff, rose in the German public's esteem until Hindenburg came to eclipse the Kaiser himself.   Hindenburg retired again in 1919, but returned to public life one more time in 1925 to be elected as the second President of Germany.
Hindenburg is commonly remembered as the man who as German President appointed Nazi leader Adolf Hitler as Chancellor of Germany.  Hindenburg personally despised Hitler, condescendingly referring to Hitler as that "Bohemian corporal".  Hitler repeatedly and forcefully pressured Hindenburg to appoint him as Chancellor, Hindenburg repeatedly refused Hitler's demand. Though 84 years old and in poor health, Hindenburg was persuaded to run for re-election in 1932, as he was considered the only candidate who could defeat Adolf Hitler. Hindenburg was re-elected in a runoff. Although he was opposing Hitler, the deteriorating political stability of the Weimar Republic let him play an important role in the Nazi Party's rise to power. He dissolved the parliament twice in 1932 and eventually appointed Hitler as Chancellor in January 1933. In February, he issued the Reichstag Fire Decree which suspended various civil liberties, and in March he signed the Enabling Act, in which the parliament gave Hitler's administration legislative powers. Hindenburg died the following year, after which Hitler declared the office of President vacant and, as "Führer und Reichskanzler", made himself head of state.
The famed zeppelin Hindenburg that was destroyed by fire in 1937 was named in his honor.


Oh yeah, he was a Dachshund Lover.

Trinket has those longer legs like Hindenburg's dachshund does. It's better for their backs.