Visit NBCNews.com for breaking news, world news, and news about the economy

He may not have been able to see it, hear it, or even run very well from it, but he could smell it and feel it's destruction, and that was enough for our latest Dachshund Hero to wake up and save his family from the fire that destroyed their home.  This blind, deaf, 3-legged rescue boy who hails from Grady County, Oklahoma, goes by the name of 'True,' and was the dog that nobody wanted.  Boy did he return the favor of his humans for being there for him.  Video and words words via NBC:

Katie Crosley has endured her fair share of hardship.
Her son, Jace, was born with a heart defect.
Crosley said, “We spent four weeks in NICU. When it rains, it pours, I guess.”
Early Sunday morning smoke and flames consumed their Grady County cabin.
Katie and Jace woke up to a wailing Dachshund.
A genuine miracle, she believes, considering “True,” their pet dog is blind, deaf and only has three legs.
“I thought he had to go outside,” she said. “When I opened the door, it was a wall of flames.”
An electrical short ignited a fireball on the front porch, barricading Katie and Jace inside.
They navigated through the smoke and out the back.
The fire victims lost everything, including all the baby supplies they had just collected.
“All his stuff from NICU, medical records, all gone,” she said. “So that’s the hardest part, having all that stuff from when he was little.”
There is little left here and yet, Katie is grateful for so many things, mostly the disabled Dachshund nobody wanted.
She said, “We’re thankful for him. This could have been a bad deal.”
An animal rescue that somehow returned the favor.

Thanks to all the good news-hounds - 'Sasha' in Monterey, California, and 'Ellie' and 'Parker,' - who sent us links to the story while we were away eating Turkey!  Here are some pics of some of these beautiful news-hounds: 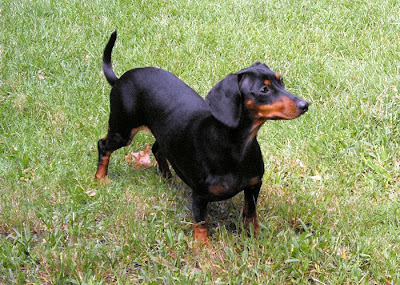 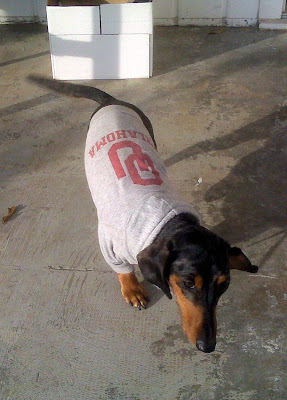 Parker
Posted by Rowdy and Bette at 8:12 AM

Wow! That is just an amazing story. True is a true hero.

This story show's every animal is special!

Wunderbar! A hero. This story makes us wag.