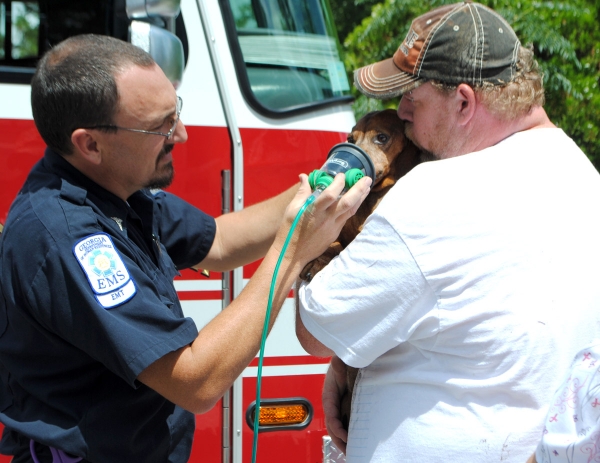 We know that there is a happy family in Martinez, Georgia.  Well, not so happy that they have had major fire damage to their house, but happy that their 7-year-old red smooth named 'Chip' is still with them.  Chip was nowhere to be found when the fire was blazing at their home yesterday, but after the firefighters extinguished it, Chip came out the front door.  Excerpt from North Augusta Today:

Standing by as firefighters finished putting out a fire that badly damaged their Martinez home Tuesday afternoon, the Mims family had one big concern on their minds.
Their 7-year-old Dachshund, Chip, was still unaccounted for.
“Everything else can be replaced,” said homeowner Jennifer Mims. “He can’t be.”
A Gold Cross EMT used a pet oxygen mask on the dog, which appeared only to be shaken up.
It’s completely destroyed inside,” said James Mims, who feels fortunate his family wasn’t inside when the fire started and his dog was found safe.
When firefighters arrived at the home, they saw the back door was open and thought the dog had escaped.
“Evidently he was hidden somewhere,” Martinez-Columbia Fire Rescue Battalion Chief Danny Kuhlmann said. 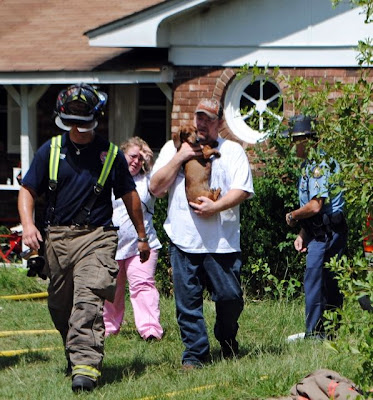 Find out more about pet oxygen masks at the Emma Zen foundation on facebook.