It's So Unfair, We Want To Cry 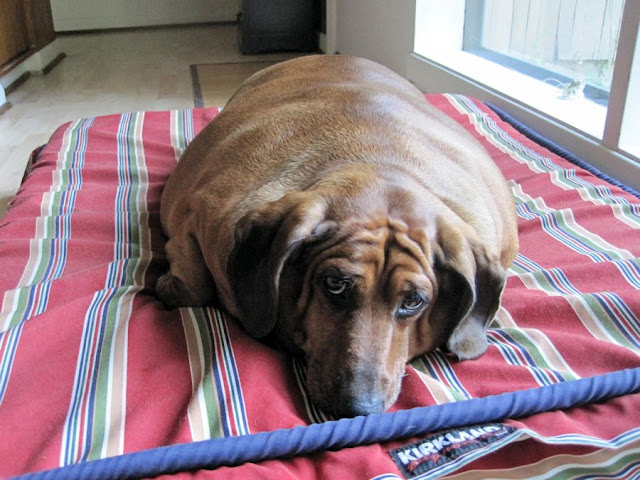 The human race is going mad and our hearts are weeping.  Now, we've seen a lot of Dachshunds over the years, tens of thousands of them, and we have never, EVER, seen such an overweight Dachshund.  Why, oh why....we're simply at a loss for words. 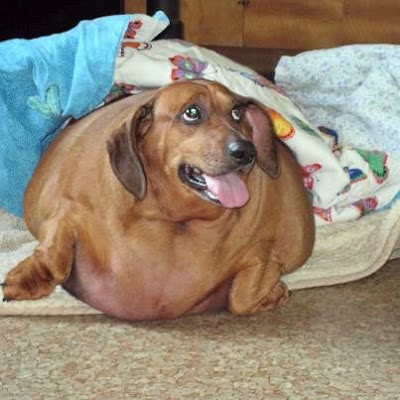 
Our story began when a relative of this boys family stepped in and asked for help. Aging owners with failing health were simply loving him with food. They just couldn't say "no" to those big brown eyes. Through many tears, the owners relinquished him. It is very frustrating and sad but we are thrilled to be able to help him, and now moving on with his new life.
Wonderful Patricia volunteered to pick him up in WA and deliver him to me in Portland, OR. I had no idea what to expect. I thought a basset hound would show up or that he didn't really weigh 70 lbs. Well, he arrived Sat. Aug. 18th and to my astonishment he IS a dachshund and he actually weighs 77lbs. He is extremely sweet and loving. He was obviously loved and is a joy to work with. I applaud anyone who takes on the task of rehabilitating an emotionally or physically abused dog.
He is a 5 year old standard dachshund. He is on a special diet to lose the weight and get back to being a happy dog. We think that he should weigh about 30 to 40 pounds. I immediately took him to the vet for blood work and it miraculously came back normal. I plan to do swim therapy with him and treadmill work once he starts to lose a little. He will need a dental and may eventually need to have excess skin surgically removed.
Read more on his facebook page.
Posted by Rowdy and Bette at 7:58 PM

That is just pathetic. Cushings possibly? Whatever, no excuse for this. Poor dog.

I'm so glad that he's with his foster mom now and can start his journey to getting health!

Awww...so sad, but so glad he is getting help.

He's in rescue, he wasn't "abused" an elderly couple with dementia, I think. It's all good from now on. He's young. My rescue friend took in an older girl, slimmed her down and she had a tummy tuck. (That vet does good work!)She's enjoying life now!

I believe a standard should weigh not more than 30 lbs and thats a large standard. The norm is in about24-26 lbs. The green bean diet and a lot swimming should do just fine. Swimming is a lot easier on his already taxed little legs and joints. Keep us tuned in when he is fit as a fiddle.

My friend has a dog and she is a beagle. She is a good dog just she weighs 40 lbs and she is on a diet and doing good. But she looks unhappy what can i do to help?

I dnt have fb but am an avid doxie lover. I have a 13 yr old longhair n a 5 yr old short hair. Both red. They r my everything. This babys story has broke my heart. I would love to help with his recovery. Please email me with updates and what i can do to help... mjsmith08.js@gmail.com