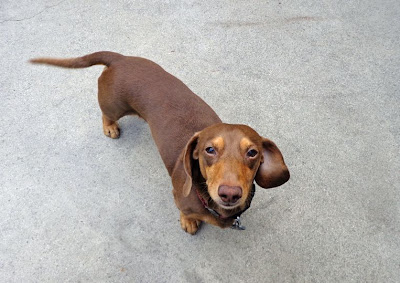 Our hearts go out to the family and friends of little smooth chocolate 'Coco,' seen here, after a series of unfortunate incidents and an archaic government led to the California native being euthanized after a tussle with a skunk in the back yard where he received a "minor scratch on the nose."  It seems he later bit his human's finger, which became infected, and the story goes downhill from there.   Excerpt from the Long Beach Press Telegram:

Coco was an aggressive watchdog, not timid about rushing into the backyard bushes where an intruding skunk sought sanctuary.
The dog's encounter about 3 a.m. June 12 would result in a scratch on its nose - and lead to the 6-year-old Dachshund's euthanasia three days later. Officials from Long Beach Animal Care Services - also known as Animal Control - say the pet was euthanized because of state law requirements for animals that had not been vaccinated for rabies prior to being injured by a possible rabies carrier. One of the pet's owners countered that the Dachshund had been tested for rabies, and the test results had been negative. "Coco was the family dog," said Robert DeSimone. "We had him since he was 2 months old and were totally devastated to hear that he was killed by Long Beach Animal Control, despite the fact that he tested negative for rabies - and were told by Animal Control he'd only be killed if he was positive for rabies. ... I'm incredibly sad and angry that he's gone now." Animal Control officials said that the dog's blood was tested for signs of rabies to quickly determine whether the skunk was rabid and they needed to locate it. However, the blood tests for rabies are considered unreliable. The only reliable way to check for rabies is to check the animal's brain after death.
DeSimone, who lives near El Dorado Park, said Coco had only a minor scratch on the nose. The following night, June 13, DeSimone said he attempted to pet the dog. But it growled, prompting a scolding - and that, in turn, spurred the irritated watchdog to bite the scolding finger, the pet owner recalled. DeSimone said the finger was swollen, so he went to Los Alamitos Medical Center for treatment. A staffer called Animal Care Services, which picked up the dog June 14. "I was told (the dog) was going to the quarantined 10 days," DeSimone recalled. But the following day, June 15, the dog was euthanized, despite blood test results showing it didn't have rabies. Ted Stevens, acting manager for Long Beach Animal Care Services, confirmed the finding, explaining that state law requires the euthanasia of any pet that doesn't have a current rabies vaccination when it is injured by a high-risk animal. "Since we could not locate or test the skunk, a high risk for rabies, we had to assume the dog was exposed and treat him that way," he explained.
Stevens emphasized the importance of regular vaccinations and licensing your pet. "It would have made all the difference in this case," he said.


You can't fight the rabies vaccination laws on the books in every state.
Posted by Rowdy and Bette at 9:23 AM

So sad and unnecessary. Just get the shot!

The same law applies even here in Quebec Canada. If u get bit by a dog, especially one who encountered wild life, they do pick up the dog. Now me thinks the owners were irresponsible in not getting their dog vaccinated, especially knowing he was an avid hunter and protector of his territory. RIP little guy.

It's a really sad story. I would be completely devastated if my dachshunds were to be killed by any reason. I'm not blaming the owners for this, the dog shouldn't be euthanized so quickly, especially with the negative results, but they surely should have vaccinated their pet. It's not about the law, it's about caring for your pet's health.

There are many pets who have reactions to vaccinations. We (in America) over-vaccinate pets. I am sure it was not for a lack of caring about their pet that they did not vaccinate.
~Maggie

45 years ago I learned this lesson the hard way...I grieve for the loss of this dachshund!

What about the animals who are severally allergic to the vaccine and cant have it or they die. My dog is one of those, are you gonna tell me they are gonna put him down because i cant get him vaccinated and legally he is forgiven of the rule. As for a scratch...rabies doesn't transmit that way. I am so sorry stupid people had to get in the way of letting this dog and their family carry on with their normal life.
This incident was handled poorly... and I hope the people who handled this get some kind of reprimanding for telling the owners one thing and never giving them the right info, or the chance to say good by to their beloved friend.

Rabies CAN be tranmitted via any break in the skin. All it takes is the skunk's saliva or blood to enter the wound. The virus is transmitted via bodily fluids and mucous membrane to mucous membrane contact.
You cannot test a live animal. The tests are done by taking and examining the brain matter from a deceased subject. If an animal has been exposed to a rabies vector, it should be quarentined and observed for symptoms for 10 days. If symptoms appear, the animal needs to be put down and the testing done.
Regardless, any human possibly exposed, needs to start receiving treatment immediately. With both humans and animals, by the time rabies symptoms appear, the virus has become terminal. There is no cure. By shear luck and fortidude of immune system, only 2 people in the US have lived through a rabies episode once neurological symptoms arose, and both were left with severe brain damage.

The owners were either mistaken in what the dog was actually tested for, or they were lying.
Never the less, the owners were negligant in not vaccinating the dog, and animal control was negligant to the way the virus works and behaves. In the end the poor dogs suffered through a human error.