A Badger Wanders Into A Nevada Convenience Store 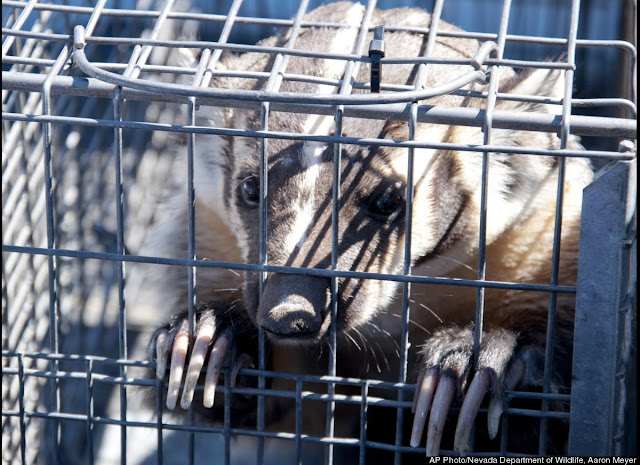 Where's a Dachshund when you need him?  Probably napping under some covers somewhere.  Catching up on the latest badger news, the city of Sparks, Nevada could have used a Dachshund a few weeks ago when a wayward badger walked into an open door at a bottled water/convenience store at about 3 PM in the afternoon.  He kept authorities at bay for about an hour after he couldn't be snared and he dodged a tranquilizer dart.  The tricky little fella was finally lured into a cage with cat food.  Excerpt from the Associated Press:

No one was hurt in the standoff at the bottled water/convenience store in a residential neighborhood in Sparks, and the badger ultimately was returned to the wild north of Reno, Nevada Department of Wildlife spokesman Chris Healy said.
"Obviously it was pretty hungry because when they put the cat food in the trap, it went right in," he said.
A state game warden was called to the Fresca Waterstore on Rock Boulevard near Sparks High School along with two assisting officers from Washoe County Animal Services, Healy said.
"Some species we can't relocate, we have to euthanize them. But this one was determined to be OK."
"They are a lot more common than people realize up here but they are nocturnal – they operate at night, and usually not in areas like this," Healy said. "It's the first one I've ever deal with and I've been here 27 years." 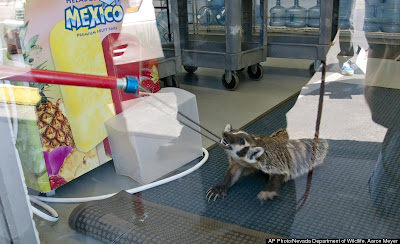 For any Badger Hound out there who thinks they could have taken on this critter, have another look at those claws... 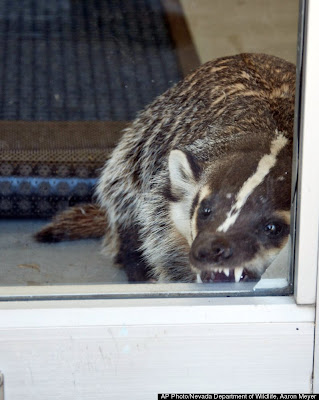 ....and those teeth.  It might be better to just stay under the covers.
Posted by Rowdy and Bette at 9:11 AM

Good thing that it wasn't a homey badger. BOL!