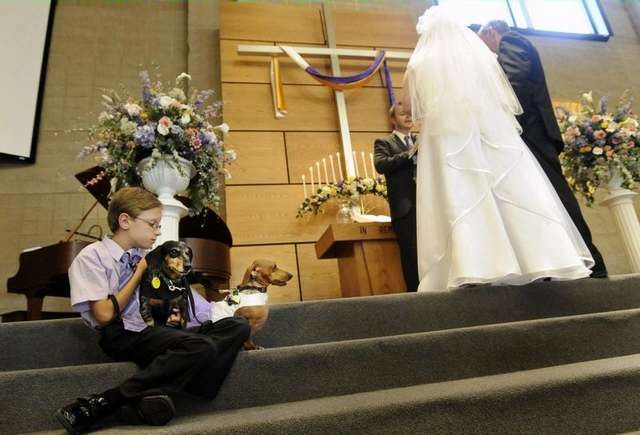 Ringbearer Alex DeSmith (left) holds Buzz and Molly during the wedding Saturday of Teresa Ruckelshausen and John Hurney at Prairie Hills Covenant Church in Sioux Falls, SD. The Dachshunds served as maid of honor and best man. Photos by jay pickthorn / argus leader
We've heard of Dachshunds taking part in wedding ceremonies before, but we gotta admit, we've never heard of a Dachshund duo who were Best Man and Maid of Honor!  Thanks so much to our pals 'Oscar' and 'Hans' for sending in the link!  They write:
Hi Joey and Maggie!
We hope you have been able to stay COOL these last few days! We are a couple of hot dogs!
Maggie, we have been following your health issues and are WOOF-ingly glad that you are doing better.
Anyway, we wanted to send you this article from the Sioux Falls, SD, newspaper. Last year when Mom and Dad got married we thought we would get to play a starring role, but we ended up spending the weekend at the doggie spa. Oh well. We probably would have had to argue over which one of us was to be "best dog" and which one had to wear the Maid of Honor dress!
Stay long and awesome.
The Argus Leader goes on to note:
The bride looked nervous.
The groom blinked back tears of joy.
The maid of honor and best man wagged their tails.
And whined a bit.
And the maid of honor emitted one sharp yip when it seemed as if no one was ever going to pay attention to her.
Yes, Saturday's wedding between Teresa Ruckelshausen and John Hurney was a bit untraditional.
Teresa and John knew from the start of their engagement that Teresa's dogs Buzz and Molly would be their attendants.
After all, the dachshunds had given their approval to John the minute they met.
"They liked him, so that tells you something," says Teresa, an MRI/CT technician with Sanford Health. "You listen to what your dogs tell you."
Read all about the wedding and see more pics at The Argus Leader.
Posted by Rowdy and Bette at 8:37 AM

Our dachshund was in our wedding- would love to share the details & photos with you! :D

The bride is definitely a smart human and they should have a wonderful marriage! Congrats to all 4 of them!