Oh, the trials and tribulations of being a Dachshund Lover.  This video went viral last week according to Alabama meteorologist Mark Prater's facebook page:

When we had our video blooper "little wiener" last week, I had a lot of folks tell me it would go viral. Little did I know what viral REALLY meant.

We've lost count of how many radio stations (especially national shows) across the country.
1.8 million websites in the past 7 days! 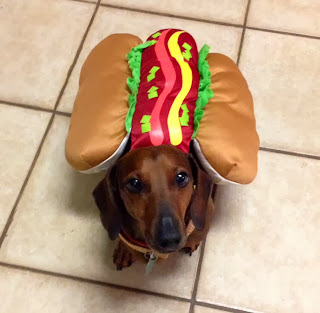 And see....like all good Wieners, Mr. Prater's Dachshund 'The Colonel' DOES get dressed up!
Posted by Rowdy and Bette at 8:52 AM

The Colonel is very cute! I'll have to show that to my daughter who majored in broadcast meteorology. I think she'll agree that it would be difficult to do the weather after someone said something like that.

If she had just said,"...little wiener DOG..." all would have been well.