'The Long and Short of it All' Turns Six Years Old 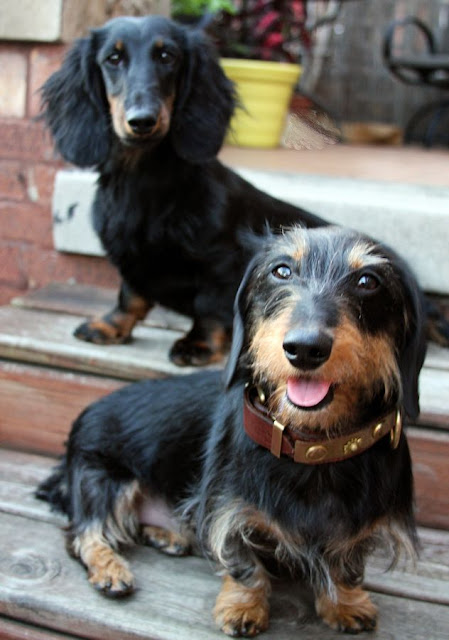 Your hosts 'Bette' and 'Rowdy'
It's not the most exciting Dachshund news in the world at the moment - nothing you should go and shout from the mountaintops - but 'The Long and Short of it All' turns a whopping 6-years-old today!  That's an eternity in the world of the world wide web.
We just got back from an extended vacation, and we're still catching up with everything that has happened while we've been off sunning ourselves.  Thanks for all the emails and comments about some pretty exciting Dachshund news events that occurred while we were away.  We'll get to those later this week.  In the meantime, it's our anniversary - so we're gonna relax and work on our tummy tans just one more day.  We gotta look hot for speedo and bikini season.

The PA Piebalds here, Maggie, Max & Melly, and we just wanted to comment on your 'extended vacation': indeed it was! What are us Dachshunds supposed to do for entertainment while you're away living the high life who knows where!? Anyway, we're willing to give you few extra days of R & R in recognition of TLASOIA turning six!

We'd also like to say 'thanks' for posting the painting of beloved Maggie and Joey. Maggie's eyes are so very beautiful.

Finally, we're trying to figure out if it's possible that Rowdy gets a bit more adorable every single day?! The latest photo of Rowdy and sister Bette is tremendous!

So, thanks for keeping the flame burning, and for continuing to allow your Dad to participate. Us Dachshunds can always spot a worthy human, and we're big fans of your Dad, too.

HAPPY anniversary to the hosts and your dear human!!!

We think you are the 'hot dogs' in our lives (next to ourselves), and we appreciate all the good you!! Especially your blog - doing your work & just by being our favorite site....EVER. We support you through all the ups and low to the ground downs that we all experience at some point as a doxie (dang health issues we deal with). grr.

but, many many tail wags and belly rubs to you, R-man and Miss Bette!!

And a special woof to the original hosts at the Rainbow Bridge.

happy 6th blog-a-versary!!!!
we're just as excited and eager to read your posts as we ever have been! here's to many more "long and short" years!!!

You're doing a fantastic long job!

Thanks for all your work on keeping the blog! I enjoy reading it each week.

Question: Where did you get Rowdy's collar? I think its the most unique collar.

Congratulations on your anniversary! 6 years is amazing. My blog is only half your age but I hope it's still going strong in 3 years.

Hi all from Tinker Windy and Gretel. Just want you to know how happy we are that you are still blogging. Mom got us a new sister so we are educating her on the ways of the world. She already knows that mom spends some time first thing in the morning reading us your blog. Hope you guys had a great vacation. We will take our new sister on one when she has all of her shots. Love from all of us. Tinker, Windy Gretel and Liesel

We look forward to many more years ahead.

The PA Piebalds & Cinnamon's human's just checking in. We're trying not to bug you guys, especially since the cease & desist order, but we can't tell you how anxious we are to hear from you guys first hand.

We continue to check every day for new posts, and want you to know your fans, human, Dachshund; we even have a feline buddy who looks forward to your blog; can't wait.

Bless Rowdy, Bette, Dad Carson, and Angels Maggie & Joey. May the Long and Short of it All continue on for many, many years to come!

To all readers/lovers of The Long and Short of it All:

Does anyone from the Chicago area, or perhaps affiliated with MWDR, know what's going on with Carson, Rowdy & Bette?

We pray for Carson and his babies every day, and try not to be a pest, but we are genuinely concerned. Thanks in advance to other members of TLASOIA family for listening.

Just want the Bording family to know you are thought of each and every day. Hope your summer is going splendidly, and that this post finds you all in excellent health and good spirits.

The passion for all things Dachshund, and the love for these amazing souls as evidenced throughout The Long and Short of it All, remains something to look forward to. When you are ready and able to return, your faithful and dedicated audience awaits.

One this is for certain, Rowdy continues to get more and more good looking by the minute.

Cinnamon's Humans and the PA Piebalds