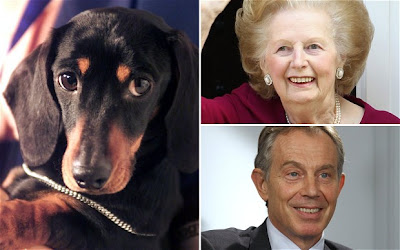 Looks like we can add former Prime Minister Tony Blair to the list of Dachshund Lovers!  He is receiving two Dachshund puppies belonging to Baroness Thatcher’s former private secretary Lord Charles Powell, whose sausage dog Talitha recently gave birth. These are the puppies who you may remember gave Thatcher her "last smile."  Via The Telegraph:


Lady Powell said Cherie agreed a month ago that she would take two of the litter and during Lady Thatcher's funeral they spoke again, reported the Daily Mail.
“I had told Cherie about the puppies and then we spoke again at the church and I told her they how they were doing,” said Lady Powell.
“She is taking two for her children, Kathryn and Leo who adore dogs. I am pleased they are going to Cherie.
She added: “I have also sent a letter to Pope Benedict to see if he would like one. But really I want them to all go to friends.
“If I give the puppies to Cherie and the children I can stay in touch with them and get regular updates.”
Lord Powell said he was relieved to be giving away some of the litter, saying: “With the puppies, which are all in Carla's bedroom, we have got 14 dogs altogether.”

We would love it if the Pope had a Dachshund!  So, The Pope and A Dachshund walk into a bar....

These are purportedly the Dachshund puppies in question.
Posted by Rowdy and Bette at 7:26 AM