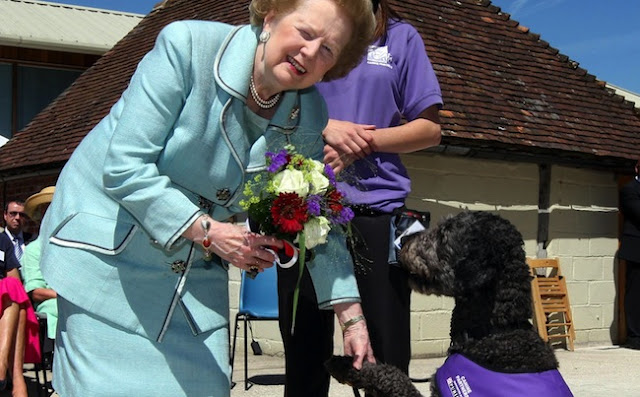 What was the very last thing that made Margaret Thatcher smile before she left this earth?  Dachshund puppies of course.  Thanks to our friend Jerry for sending in the link to the Guardian:

Among the last things Lady Thatcher saw in the final hours before her death on Monday was a video of eight biscuit-coloured Dachshund puppies and their mother.
The dogs were the property of Lady Powell, the Italian wife of the former prime minister's trusted Downing Street private secretary, Lord Powell who on Sunday night was the last person to visit Lady Thatcher as she neared the end of a 20-year battle with strokes, memory loss and the rheumatic condition polymyalgia.
Sitting with her at her suite in the Ritz where she had been staying since the end of last year, Powell took out his iPad to entertain his former boss. On it, he showed her a video that his wife had sent him from their home outside Rome which the former prime minister had visited for several years running during her decline.
She had smiled at the antics of puppies and their mother, Lady Powell said her husband had told her. "That was probably her last smile," she told the Guardian. "After seeing her, Charles's comment was, 'I'm afraid that she will not be with us for very long. I think she's drifting away.'"

Was Margaret Thatcher ever owned by her very own Dachshund?  Not that we can tell, but Lady Powell goes on to say in Anorak:

Lady Thatcher adored animals. I have a dachshund puppy called Maggie that she loved. I name all my animals after friends and distinguished people. I have two black sheep called Barack Obama and Colin Powell.”

Curiously, that dog Lady Thatcher is shaking paws with look a lot like Bo Obama. It sure doesn't look like a doxie.