Jack And His Flock Of Sheep 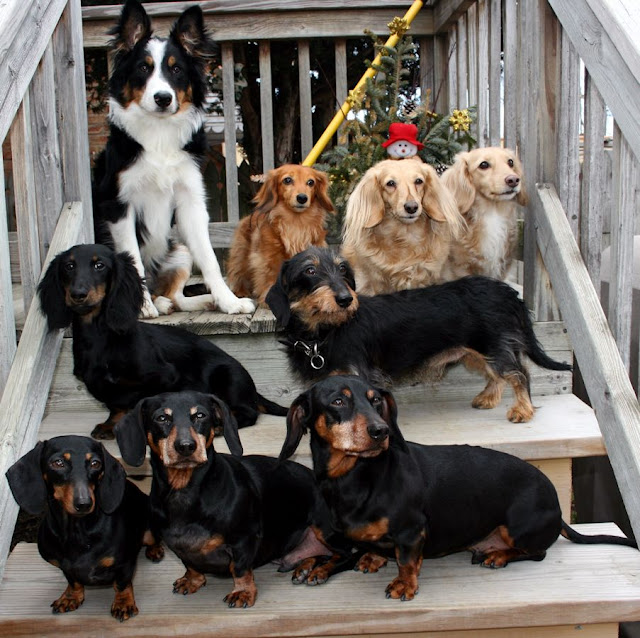 Your new 'Long and Short of it All' hostess 'Bette' got to attend her very first playdate with 'Rowdy' and our agility friends a few days ago.  'Jack' the Border Collie, who is just a puppy at 7-months-old himself, made a beeline to Bette to play with her and he got a little rough starting out, and boy did she whip her snout around and let him know what's what.  He didn't bother her anymore.  Later, they were playing together, and even with all the other Dachshunds around, the two of them took a nap together.
This wasn't your average playdate, either - it was also a spa day.  This crew gets together every two weeks for a spa day, and we were invited over to join them for "nails, teeth, and ears."  It took over three hours of hard work for the humans to drummel/grind 163(!) nails (each dog has dew claws, plus Rowdy has an extra nail on his back right foot), clean 18 ears, and scrape and brush lord only knows how many teeth.  It was exhausting.  But afterwards it was playtime in the yard.  One game we played was called "Find It!" where a handful of kibble was thrown in the grass and we had to sniff it out.  A few rounds of this was better than hunting for Easter Eggs.  You should should have heard us all barking we were so excited.  It was a funny sight. Hope we get invited back real soon.
Posted by Rowdy and Bette at 8:50 AM

What a gorgeous group! I am so glad Rowdy and Bette got to have a playdate with their agility friends.

What a crew. Boy how great for a puppy to have time with dogs of all ages. So nice to have Rowdy to take up the play play play of a pup. Penny would just about do me in with her energy. Yeah Rowdy, now you know what it is like.
Bette doesn't look like she would take any guff from anyone. She's gorgeous.
So happy happy for you all.
Carson it's so good to see you here. Love the pictures. See, many people kept checking and hoping you would be here. Hard habit to break, huh?
We love you.

Just lookin' at the picture again. Bette is sooooo elegant. Look how she holds her head. Beautiful girl. Hard to believe she's so young.

Cinnamon's family of humans from PA here, expressing our extreme gratitude again for your ongoing good work. Bless you.

What a fabulous looking group for a playdate of any kind. Bette, looking a little shy as could be expected, and Rowdy alert as always.

We were up in NYC for the weekend and are pleased to report Dachshunds of every variety, and age, were well represented throughout lower Manhattan. They all could be overheard commenting about the most recent postings on The Long and Short of it All.

Bless Dad Carson and all members of his beautiful family.

I'm impressed! You got all the dogs to sit and face you for a picture. that's not easy with our bunch. Too much to go see and get into. haha