A genre painter and the son of the animal painter Robert Eberle, Adolf was schooled in Bavaria. A pupil of the Munich Academy and from 1856 of Piloty, his first painting was shown in 1861.

Eberle’s natural abilities at figure interaction and accuracy keep the viewer marvelling and those who already own his work from selling. Adolf exhibited at Vienna, Dresden and Munich and received a medal at Vienna.  Source.

His paintings, which include many dogs, mostly Dachshunds, sell for tens of thousands of dollars today.  Thanks to an Anonymous Dachshundist for sending in the video! 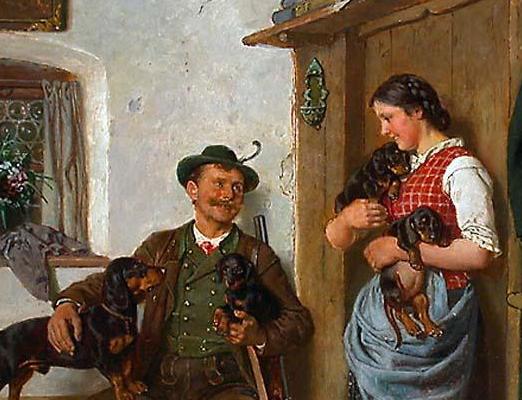 I particularly enjoyed the paining in which a young woman is bending over to deal with a wiener dog-who is barking and/or growling and snarling at her. Good to know they've always had that sweet, charming disposition ! :-D

Yes I know just how bossy they can be...our Bertie (*smooth haired red miniature) is the sweetest natured boy you can imagine, however he has such incredible eyesight he can spot someone walk by our house on the other side of the road, at least 30 meters away and he is already vocalising his displeasure about them even daring to walk there...cheeky lad...

Luv the paintings. Thanks for sharing!

nice to know that dachshunds have been included so lovingly in artwork...thanks for sharing!