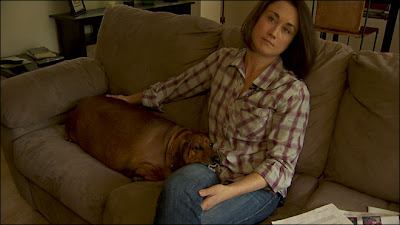 Obie and Nora Vanatta; Video no longer on net, was at:  KATU.com

We're quite sure that you remember 'Obie,' the Obese Dachshund, who we have featured many times here over the past few months through his rescue and impending stardom - appearing on national television shows including Live with Kelly and The Today Show. 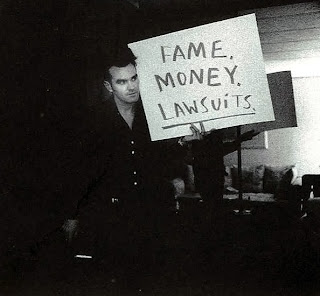 Well, as noted by our hero, British singer Morrissey, above, Obie got the fame, he got some money to help him out - now bring on the lawsuits.  Oregon Dachshund Rescue (ODR) has filed legal papers in Portland, demanding the return of Obie from his foster home.  His foster mom and caretaker, Nora Vanatta, released this statement yesterday on Obie's Facebook Page:

Dear Obie supporters,
As you have all been following this story and supporting Obie's journey as he in turn inspires you, I must tell you of the awful news I just received.
When Drew Martin Lee initially reached out for help to get Obie out of his dire situation, Jenell Rangan recognized that she didn't have the resources to properly care for him and she publicly shared the letter. I stepped up and said that I would foster him if someone would bring him to me. I had absolutely no idea what to expect but I knew that I could help him. Patricia Malone (Bosello) volunteered to pick him up and bring him to me. I took it upon myself to take him to the vet the next day to get an exam and blood work. Linda Klein graciously stepped up and offered to pay for his first vet visit as well as start a FB page to help with the subsequent care required to rehabilitate him. I am committed to his full rehabilitation even though it will be much longer than I anticipated.
The FB page exploded with supportive people from over 20 countries and many people have donated money for his care. He became very popular and national networks contacted me and asked to share his story. I realized what an inspiration he was to people and that his story was helping so many in their own journeys to get healthy and bring awareness to the effects of obesity on people as well as their pets. The attention was overwhelming at first but I was always thinking of the mission that Obie could share and I was very careful of what people wanted to write about him. I made it clear that this was a positive thing and that it wasn't about bashing the previous owners or exploiting a fat dog. I turned down several media requests because I didn't like where they wanted to go with the story. Obie has a story and a mission to share and help other people. I am working on starting a non-profit to continue to help and inspire others in their mission to lose weight.
Jenell Rangan, owner of ODR is now demanding that I give Obie to her and actually deliver him to her lawyer's office. I must appear in court Monday morning (Washington County at 9am). She is claiming that Obie belongs to her, that I am misusing funds, and not providing proper veterinary care.
It is very upsetting that Jenell is using doxie-saving money to take him away from me especially since she has received donations and support thanks to Obie and me sharing his story. She has admitted to not being able to handle him and that he is doing well with me. He has bonded to me and Hunter and Noggin. She clearly doesn't have his best interest in mind and is only interested in him now that he is famous. I am going to fight for him and I need your continued support. I am not in a position to spend money on a lawyer but it is just not right to make Obie adjust to a new home now. I am asking for your continued support to help Obie stay with me.
Thank you,
Nora

While we would certainly like to hear more from Oregon Dachshund Rescue on this matter, the facts as known show that Ms.Vanatta has done a great job with Obie - he has lost 15 pounds, she has shielded him from sensationalist exposure, and he is getting great veterinary care.  Guess we'll all find out what happens on Monday in court.  We must add that all of this drama isn't good for anyone at this point - especially Obie.

Obie already has over 10,000 signatures on a petition at change.org supporting that he stay in his current foster home.

Keep up with Obie on his Facebook Page.
Posted by Rowdy and Bette at 9:19 AM

We have already signed Obie's petition and emailed Ms Rangan directly with our 'thoughts' about removing Obie from his home (where he has bonded with Nora and her other dogs). It's a true shame Ms Rangan is after the publicity and not after what is best for Obie! You can email Ms Rangan at: Jrangan@teleport.com

I too signed the petition. Seems greed has reared it's ugle head with Ms. Rangan which is truly unfortunate. We wish obie the very best! Robin, Macy & Bailey

I have signed the petition and hope that Obie gets to stay with Nora. He is losing weight and doing well with Nora, so I see no need for him to leave her care!

Really sorry to see there are not two sides to this story and that in addition to the facebook army arrayed against an all volunteer rescue rescue group, celebrities have joined in too. Wouldnt it be something if this facebook firestorm could rescue vet and rehome ordinary dachshunds in need as Oregon Dcahshund rescue does each and every day. Have you all seen the vindictive language being used against them on facebook it sickens me. Stop donations, dont adopt from them Janelle is evil, I do not think that is what Obie would want. If it were you or me, how would you direct funds from Obie's celebrity? I am of modest means but i would direct them to rescuing vetting and rehoming other dachshunds in serious need as ODR does. Would you have transported Obie 6 hours each way in cargo? I have always thought much more highly of the dachshund community than people in general. Seeing the firestorm directed against ODR over this ONE high mnedia profile case makes me question that. I for one will not attack rescue and I would love to see both sides of this on my friends Joey and Rowdy's blog

I have commented my distaste with the language used against rescue on as many FB Obie postings I have received as well and lack of almost anyone to speak up for rescue or even ask posters to temper their response. Joey nad Rowdy are more temperate than Facebook and I thank them much for that.

So many people have invested emotionally in one celebrity dog and are claiming openly that it's pretty much Obie or nothing.When ever money is involved it's always a good idea to be very transparent indeed. I do hope this rescue doesn't suffer as a consequence when people decide to move onto the next big cause.

I have helped out a couple of rescues by fostering. After a while you become friends and don't bother with signing official forms, the dog in need is delivered to your home or you go pick it up.There is no doubt who is responsible for the dog, especially if it becomes ill whilst in your care.The person running the rescue foots the bills, usually out of their own pocket.The mudslinging involved in this story is appalling. If at any time Odie became ill and was NOT a celebrity, the woman who runs the rescue would be the one who pays the medical bills. I have read people running down rescues-all rescues- saying the people who run them are con artists.Sure people are free to donate to whomever they want but there's some dodgy ground here. I have fostered some dogs,both fat and thin, for months, they move on to happy lives. I've never made any money from fostering and I know the women who rescue are out of pocket most of the time.

Great Scott! I just found out about this yesterday and it's a mess, isn't it? I am about to offer a message of support.

I also hope that the 30+ other doxies at ODR can find their forever homes and would never advocate for people to stop their adoptions/donations to the rescue - I would like to think that the Facebook community & celebrities, etc are rallying together to ensure Obie stays where he belongs, with Nora, as opposed to back at the ODR (where Ms Rangan has stated via lawyer). It's not about rallying against the ODR, it's about looking out for the best interest of the dogs. Period. I just hope that it all works out for Obie, Nora, Hunter & Nogan on Monday!

John, I applaud you for speaking out for rescues in general, & for ODR in particular. I was happy to read today that Obie will stay put for now, but disturbed to learn the reason behind the lawsuit: that Nora transported him to NY in cargo. We all know the dangers there, we've all signed those petitions to get the airlines to reveal their cargo casualties in order to hold them accountable & make cargo safe, but that may be an oxymoron.
Thank God there was no tragedy. But I can certainly understand why ODR would have a fit upon learning what she did, & would very rightly question his safety.
Doing business without a contract, however, can also be described as reckless and endangering the life of the dog if he should indeed need more medical attention than he's getting.
Seems like there's enough blame to go round. Also seems like both sides want what's best for Obie, in their own imperfect ways. The only thing that is FOR SURE is that Carson's blog practices balanced journalism & we are grateful to reporters Joey & Rowdy for their professionalism when covering a deeply felt story like this one.
Michele