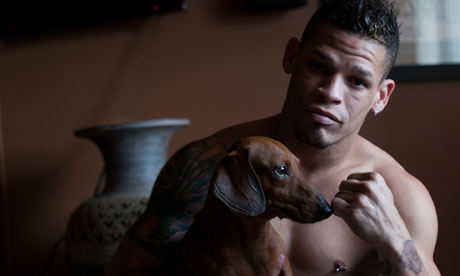 It seems that Dachshunds are always on the cusp of Popular Culture, and this isn't more evident than finding out that Puerto Rican professional boxer Orlando Cruz has a handsome red smooth of his own, who goes by the fantastic name of 'Bam-Bam!'  Mr. Cruz made headlines this month by becoming the first boxer to come out as gay while still active professionally, stating that "I have and will always be a proud Puerto Rican. I have always been and always will be a proud gay man."
Well, he's also a proud Dachshund Lover.  Thanks so much to our pal 'Jack' for sending in the link to this news and photo.  He pens:

I thought you guys may be interested in this story in the British newspaper, The Guardian, that my Dad found about the boxer Orlando Cruz, which talks about, amongst other things, his Dachsie Bam-Bam.

"I decided to be free," Orlando Cruz says with piercing clarity as he looks out across his home city of San Juan. The Puerto Rican fighter, who this month became the first boxer to declare publicly that he was gay, remains on the balcony of his condominium as a blue and humid sky darkens. Cruz ignores the drops of rain that glisten on his bare torso as he whistles to Bam-Bam, a cheerful sausage dog who jumps on to his lap. The 31-year-old then talks with increasing passion about his new-found liberty.
"They can call me maricón, or faggot," he says with a wry smile as he tickles Bam-Bam behind the ears, "and I don't care. Let them say it because they can't hurt me now. I am relaxed. I feel so happy. But to make this announcement to the whole world I had to be very strong."
Cruz flexes his tattooed arms while deflecting Bam-Bam's urge to lick his face. He might usually be besotted with his little dachshund but, now, Cruz is fiercely concentrated. On Friday night, in Kissimmee, Florida, he faces the most testing bout of his career, a WBO world featherweight title eliminator, but he needs first to explain the far harder struggle he has finally won over fear and prejudice.

Read more at The Guardian. 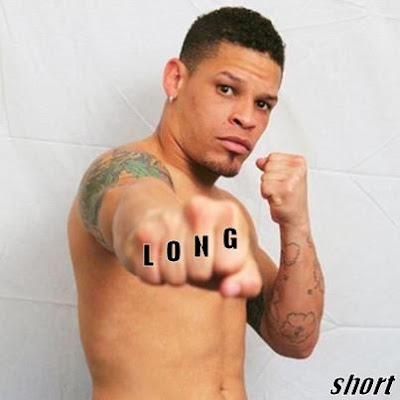 Thank you for sharing!
Eliza57 & Gigi