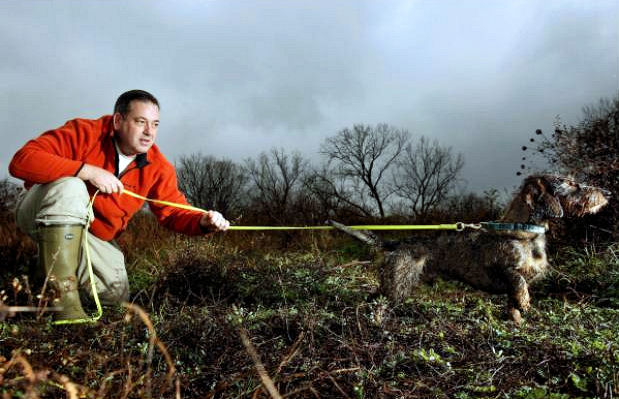 Just because you live in the city doesn't mean you still can't track deer in your spare time - and this handsome wirehaired boy named 'Zeus' is a perfect example.  Zeus lives in a condominium in downtown Columbus, Ohio, with his human Patrick McCaffrey Jr., a busy lawyer.  But they love to spend their free time helping fellow hunters find their wounded game - for free!  Excerpt from The Columbus Dispatch:

He shares a name with a Greek god, but — with his short legs, big nose and hairy back — is easily underestimated.
“Most people laugh when they see him — until he gets out in the woods,” said McCaffrey, an outdoorsman, 51, who spends more time these days helping fellow hunters than bringing down game himself.
“He gets a whiff of blood, and he’s a wolf. The blood tells him there’s an animal out there that he needs to hunt down.”
This time of year, Zeus is the cat’s meow for dozens of hunters who have shot a deer but can’t close the deal.
Zeus finds the deer about 30 percent of the time — sometimes dead, sometimes alive, McCaffrey said.
The dog’s small stature proves to be an asset: His nose stays close to the ground, and he is easier to control on a leash — which the state requires for tracking dogs.

Read more about Zeus and his adventures, and see another photo at The Columbus Dispatch.
Posted by Rowdy and Bette at 8:18 AM

u know wat they say bout us dachies,
"The nose knows". Bark bark.


PS: mom says to check out the cute plush dachshunds for sale at Build-A-Bear Workshop site. 16" and mini dachhunds at 6". Mom didn't know how to get them up on this blog. enjoy!! they are cute

That's awesome. My hunter cousin said he knows a guy who hunts birds with a Dachshund. People laugh until they see the dog hunt through the brush for them. He can get places that bigger dogs can't.

That's very cool. Goes to show that just because you're a city dog doesn't mean you can't run game in the woods.

Love your blog,Joey and Rowdy. My favorite is Wirehair Wednesday especially since my Peaches was featured on this past November 9th.
You may also enjoy her Vole Safari from last summer where she really "went to ground".
mudpuppy001.AVI
http://youtu.be/ywrPOB8qvWk