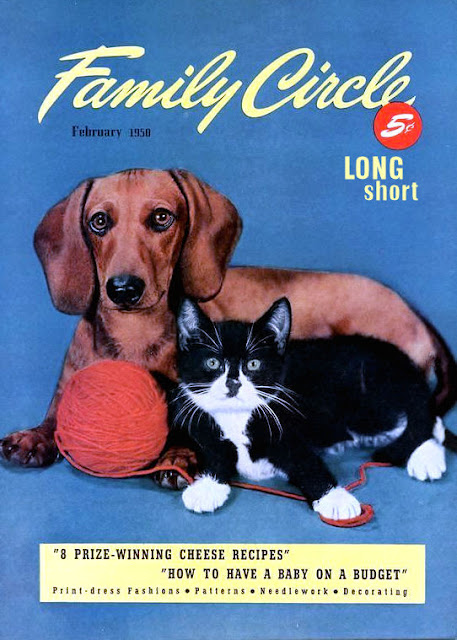 Family Circle, February, 1950:  Did someone say "8 PRIZE-WINNING CHEESE RECIPES??!!!!"  YES!!!
Family Circle is an American women's magazine published 15 times a year by Meredith Corporation. It began publication in 1932 as a magazine distributed at supermarkets such as Piggly Wiggly and Safeway. Cowles Magazines and Broadcasting bought the magazine in 1962. The New York Times Company bought the magazine for its woman's magazine division in 1971. The division was sold to Gruner + Jahr in 1994. When Gruner + Jahr decided to exit the US magazine market in 2005, the magazine was sold to the Meredith Corporation.  Source.
Posted by Rowdy and Bette at 8:28 AM

wow 5 cents is even before my time...love the dachshund and kitty!

Holy cow, a magazine that's even older than me...by two months! I didn't know that Family Circle Magazine had "photoshop" technology back in 1958, pretty cool.