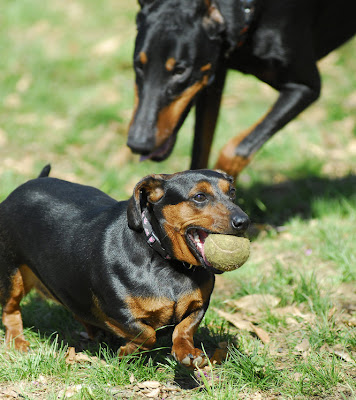 The countdown is on!  With four days to go til Spring, we couldn't be more excited to reacquaint ourselves with all the wonderful sights and smells the warmer weather brings.  This is a Dachshund News Roundup on a relatively cool March 16, 2011.  Sixty-degree weather is right around the corner!   Above, dog owners take advantage of the nice weather at the dog park at George Ward Park in Birmingham, Alabama, Saturday, March 12, 2011. The city of Fultondale has a new dog park making it the third municipal dog park in the area. A Dachshund runs with a ball as a Doberman closes in.  Source. 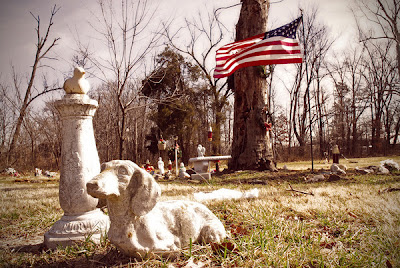 This Dachshund was so important to someone that he received a bust! (Rosa Bonheur Memorial Park, Elkridge, Maryland).  Via The Symbolic Beauty of Elkridge Cemeteries, the Elkridge Patch. 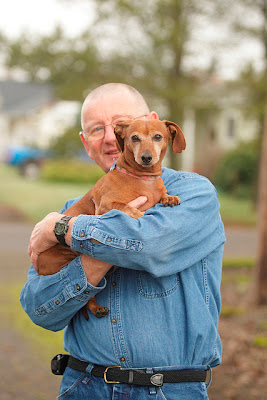 On Tuesday, March 15 at 7:30 AM, eight local heroes and one organization were honored at the American Red Cross' signature event – the Fred Meyer Breakfast of Champions in Portland, Oregon.  While 'Missy' the Dachshund had no formal training, her barking definitely made the difference when her owner collapsed.  This is her story via the Oregon Red Cross:  An 11-year-old dachshund, Missy is a tiny dog with enormous persistence. Last September, she showed up at Charles Mitchell’s house, barking furiously and refusing to leave until he followed her across the street to where Missy’s owner, Charlie Burdon, a heart attack survivor, had collapsed in his bedroom after suffering dizziness and nausea. Burdon had managed to reach his wife at work, who called 911, but by the time she and the paramedics arrived, Missy and Mitchell were at his side. Burdon, who was later diagnosed with vertigo, rewards Missy with her usual treats, walks, car rides and trips to Home Depot. The two men, who have known each other for years, both agree that sometimes the biggest hearts come in the smallest packages. 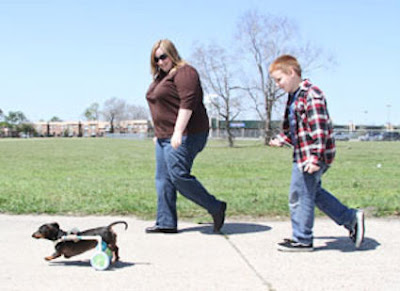 And finally, when the Schoch family’s 5-year-old dachshund, 'Happy,' goes for a run, the little dog actually goes two wheeling.  Recovering from back surgery, the Baytown, Texas, black and tan has her own custom wheelchair to help her get around and boy, does she get around.  Here, Sarah Schoch and son Christian, 9, go on a walk with Happy.  Source.
Remember, if your Dachshund shows signs and symptoms of back issues, or goes completely down where they can't walk, there are options out there!  Take your dog to your vet immediately, and listen to the good advice offered at Dodgerslist, your Dachshund disc disease/IVDD resource.  There's always a link to them in the links column on your right. They have a very active discussion list, and are real pros when it comes to offering advice for IVDD Dachshunds and general Dachshund health.
Posted by Rowdy and Bette at 8:42 AM

Springtime, when a doxie's thoughts turn to love (er, sitting in a nice sunny spot).