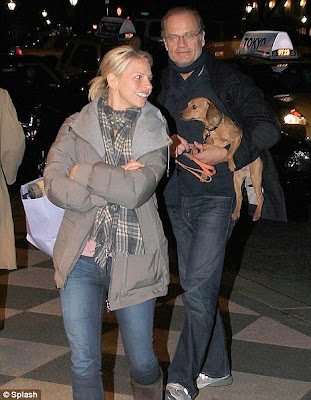 Woof Woof Woof!  We had no idea 5-time Emmy Award-winning American actor and comedian Kelsey Grammer was a Dachshund Lover!   The star who worked himself into our hearts playing Frasier Crane has been in the news as of late, with a bitter divorce from wife Camille, and recent wedding to Kayte Walsh.  This marriage will surely last - with a Dachshund involved, right?  Here's the scoop on this photo from The Daily Mail, where Kelsey and his new wife check out a New York apartment:
They celebrated their marriage with a lavish wedding reception at New York City's Plaza Hotel last month.
And now newlyweds Kelsey Grammer and Kayte Walsh are apparently looking to set up home there.
Kelsey, 56 and Kayte, 29 were spotted walking into the Plaza yesterday, where they are said to be viewing one of the apartments.
As well as being a high end hotel, the famed Plaza also offer private residences for sale.
They start at approximately $2 million for a one bedroom residence to duplex and triplex penthouses starting at $15 million.
The couple took along Kelsey's five-year-old son, Jude, from his marriage to Camille Grammer, and their dachshund dog. 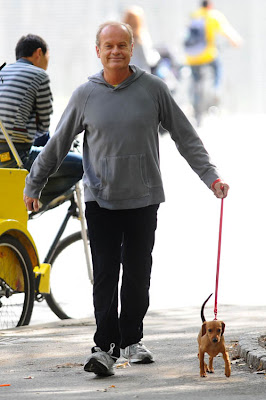 Smiles!  A photo from last fall details this cute red smooth pup in one of our awkward growing stages!  If anyone knows the pups' name, or has any more info, by all means leave a comment!
Posted by Rowdy and Bette at 8:04 AM

Hmmm That looks like a dachshund mix to me, especially in the second photo. Those legs area bit too long. Still cute, though!

I was wondering about the leg length too...but all in all a very cute (doxie mix?) puppy with a very cute Kelsey Grammar!

I love your blog and that's why i've shared the Stylish Blog Award I received with you...come over to my blog to "pick it up" and know that i really love what you do over here and so does my dachshund, Sammy!

Ashleigh sounds like a spammer or Trojan Horse or something. I don't think it's a good idea to just "come over" her blog. Or am I being a little paranoid?

An' as the owner of two AKC doxies and two "faux" doxies, all of whom I dearly love, I think Mom or Dad may have sum 'splainin' to do!